Teachers in Grayslake Elementary District 46 are on strike Thursday morning.

GRAYSLAKE, Ill. (WLS) -- A tentative agreement has been reached in the Grayslake teachers strike, according to a union representative.

Officials said the tentative agreement would increase salaries for the remaining two-years of the current contract.

Friday was a scheduled non-instructional day for students and classes will resume Monday, November 11.

Specific terms of the tentative contract agreement will be finalized and published following ratification by the Grayslake Federation of Teachers and Grayslake PSRP membership and a vote of approval by the Board of Education in the coming weeks, according to Community Consolidated School District 46 superintendent Lynn Glickman.

Thousands of suburban students were out of the classroom Thursday as teachers in Grayslake Elementary District 46 went on strike.

The walkout affects 3,700 students in Lake Villa, Round Lake Beach, Round Lake Park, Round Lake, Hainesville, Grayslake and Third Lake.

The union said the decision came after nine months of bargaining with no agreement on wages.

"We don't work in public education to get rich," said Leah Brown, president of the Grayslake Federation of Paraprofessionals and Support Staff. "We just want a fair wage so our members can afford to live where they work."

"We put out a lot of us work and a lot us work a side hustle to fill in the gaps, and having a fair wage doesn't seem like too much to ask," said math teachers and advisor Cherie Jacobs.

Educators and staff are two years into their 4-year contracts that expire in the summer of 2021.

"The students in this district score above the state average which is an important data point for a district, yet the teachers and support staff are paid below the state average," said Grayslake Federation of Teachers President Michele Beye.

The district's latest offer was a 3.8 percent pay bump for most teachers and staff for the next two years, but the union is seeking a 4.5 percent increase.

Teachers and support staff gathered for a show of unity before Wednesday night's board of education meeting.

"I hate not being in the classroom," said Jason White, middle school teacher. "I actually spoke with my kids today and told them if it was our choice we would be in the classroom with them."

"The goal of this board has always been to provide teachers and support staff with fair and reasonable raises," said District 46 Board President Jim Weidman.

"We started negotiating in January and yesterday was the first time that we saw that they were serious about taking care of their teachers. So that's hopeful," said Michele Beye, president of the Grayslake Federation of Teachers.

The school board heard from several speakers during the meeting.

"My teachers teach me to be fair, kind and respectful to others. Please treat them that way," said student Grace McKeown.

The strike has forced the district's seven schools to close, along with all after school and before school programs.

With no school Thursday, parents worked together on childcare.

"Fortunately, I am a stay-at-home mom and I do childcare," said parent Nicola Case. "I do before and after school, so I am helping a couple of parents out.

The district said in a statement that the unions didn't provide a counter offer, and instead decided to strike.

"We are deeply disappointed," the district said.

"Usually the kids just come for before and after school for the school agers, so they're here all day. So its 20 extra children during the morning time," said Peppermint Stick Children's Center owner Karen O'Neill.

The last teachers strike in Grayslake was in 2013 and lasted three days.

It did appear both sides wanted to get a deal done and headed back to the bargaining table Thursday night.

The district has compiled a list of child care facilities with possible openings for families during the strike:

For families that receive free or reduced-fee breakfast and lunch at school, the district provided a list of local food banks to access food:

For updates, students and families are encouraged to check the district's website: http://www.d46.org/ 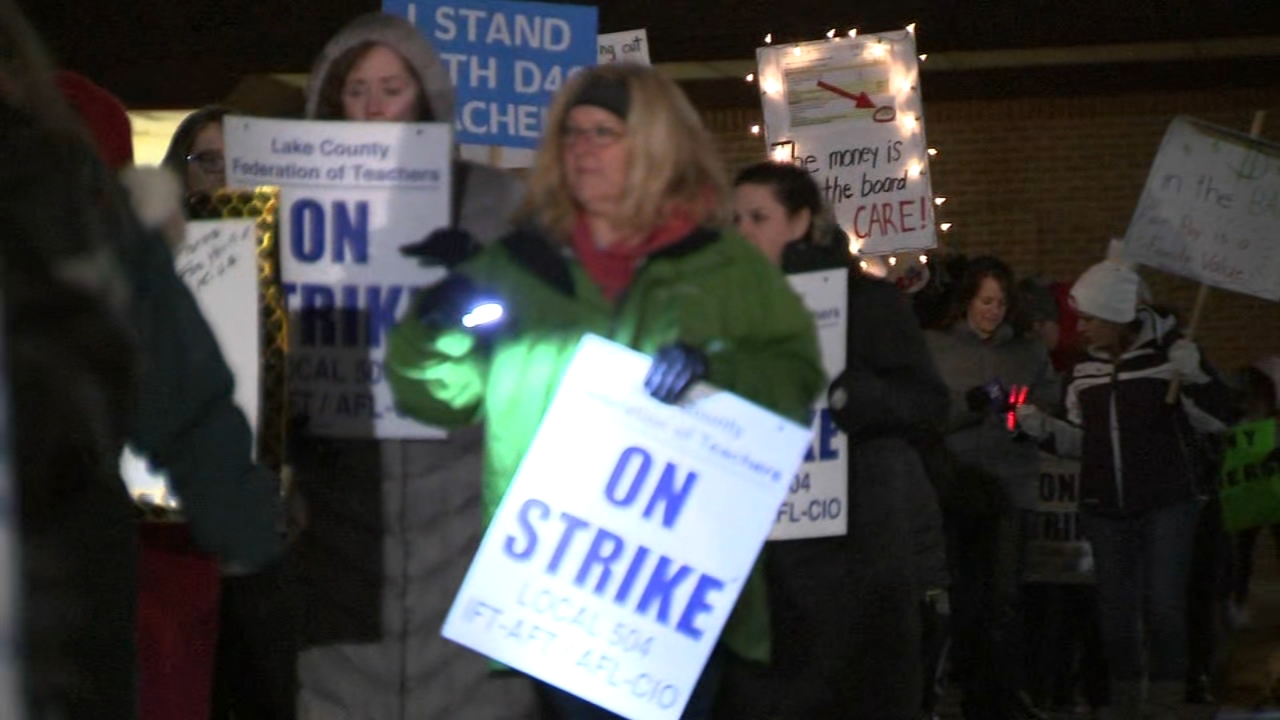