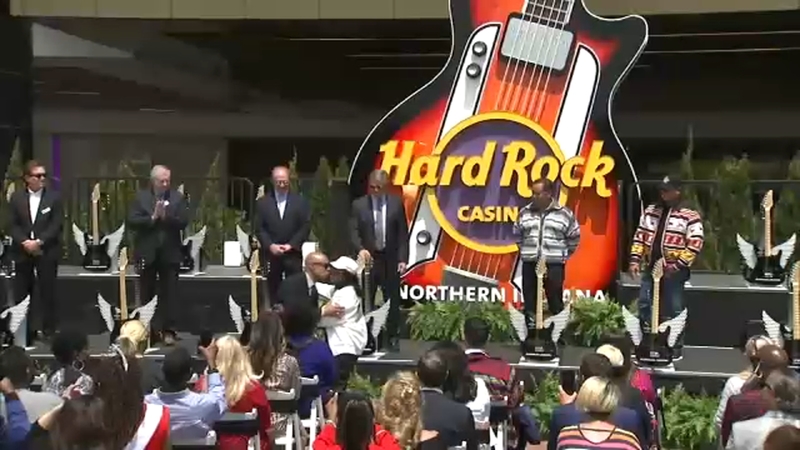 It was part of the grand opening of the new Hard Rock Casino Northern Indiana located on 29th Street just off Interstate 80/94 at the Burr Street exit in Gary.

"I would come back home and I would cry, but it would be tears. I'd be sad, but this time I came back home and its tears of joy to see what's happening here," said iconic singer Deniece Williams.

"We will continue to cultivate this facility to help to build local partnerships," said Jon Lucas with Hard Rock International.

"This beautiful facility is a product of much hard work and those who believed the city of Gary was destined for greater things," added Greg Gibson, vice president at Spectacle Entertainment.

The new casino is the result of the relocation of the two Majestic Star Riverboat Casinos that are owned by the Seminole Tribe of Florida, into one land-based facility.

"The opportunity to come back and revitalize the area and then to partner with the Jackson family, is plus," said Marcellus Osceola Jr., chairman of the Seminole Tribe of Florida.

Since the groundbreaking for the new facility in January 2020, Gary officials hoped it will provide the economic boost that the struggling Northwest Indiana city needs.

The project created hundreds of jobs for locals, like one woman who now works as a blackjack dealer.

"We're hoping that this catalytic investment spurs other people to take a chance and invest," said Gary Mayor Jerome Prince.

Dozens of pieces of memorabilia from the Jacksons are prominently featured throughout the facility.

The brothers' stage outfits and Michael's famous glove are highlighted, as well as the family's Gary home, which could receive landmark status.

"It brings back memories of yesterday," Tito Jackson added.

The Jacksons were part of the reason why Deanna Wildmo and her friend traveled from Ohio to be one of the first to experience the new casino.

"I had nine life-sized posted of Michael Jackson around my bedroom growing up, nine all the way around so, and who didn't moonwalk," Wildmo said.

There was also a breakfast in the morning before the grand opening event got underway.

Whenever the Hard Rock opens a new property, its tradition to smash guitars.

Tito, Jackie and Marlon Jackson all took part, along with Pete Wentz from "Fall Out Boy," and Mark McGrath of "Sugar Ray."