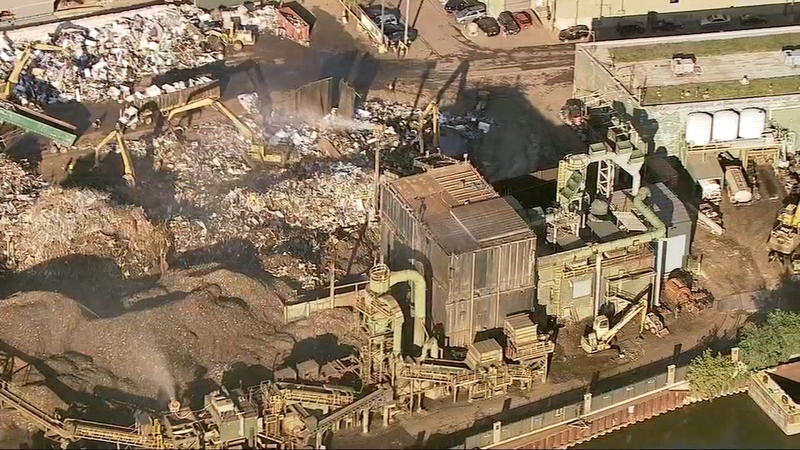 CHICAGO (WLS) -- Two days before a planned citizen rally against the century-old metal recycling plant General Iron, the I-Team has been given unprecedented access to its Lincoln Park scrap yard.

We inspected a mammoth filtration system called a "regenerative thermal oxidizer," or RTO, that will soon be in operation at the site. General Iron was required to install it after being slapped with a violation from the Environmental Protection Agency a year ago.

Despite that remedial effort, and plans by the company to close its 110-year old Clybourn Corridor facility and move recycling operations to the South Side by the end of next year, there is still widespread concern and anger from nearby residents about air pollution, noise, health, neighborhood residue and traffic.

The massive filtration system shown to the I-Team cost General Iron $2 million and resulted from an EPA violation last year.

Labkon, whose family has owned and operated the company for more than a century, said they have been taking steps to come into compliance with the EPA after being cited for emitting excessive amounts of volatile organic compounds, known as VOCs, into the air.

The RTO filter installed the past month makes General Iron the first and only metal shredding facility in Chicago to use the technology.

Think of it as a massive oven. Filtered air from the metal shredder will be directed to the RTO, which is designed to destroy more than 98% of that pollution. Exhaust will then go through a wet scrubber to neutralize any gases and filter out particulates.

Since receiving the citation last July, the EPA and General Iron have been working together on a remediation agreement. The company may still face a fine.

Neighbors continue to file complaints through the city's 311 system.

The property is for sale and owners say they are still on track to move the operation to the Southeast Side by the end of next year. Renderings obtained by the I-Team show what the new state-of-the-art facility will look like. The project price tag tops $65 million and the newly installed RTO filter will be moved there from Lincoln Park.