Thieves use sledgehammer to break into Hinsdale Marcus store, steal $30K in handbags 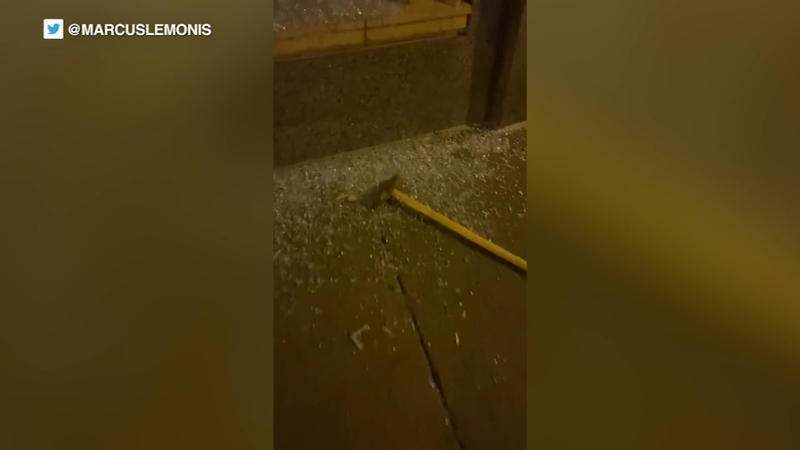 Thieves use sledgehammer to break into Hinsdale store, steal $30K in handbags

HINSDALE, Ill. (WLS) -- A pair of thieves used a sledgehammer to break into a Hinsdale store and steal more than $30,000 worth of handbags overnight, officials said.

Video taken by owner Marcus Lemonis and tweeted early Monday morning of his Marcus store in the western suburb shows shattered glass everywhere. The sledgehammer the two men used to break his front window lays on the sidewalk.

Whoever broke in was apparently in a hurry to get to whatever merchandise they could, and quickly.

"To have something like this happen is devastating for all the businesses in the community," said Eva Field of the Hinsdale Chamber of Commerce.

The store's manager said two men got into the store at about 4:30 a.m. They left in a black SUV with the license plates obscured. Police are reviewing the store's security footage, but it was dark and it's unclear how much help it will be.

Marcus has three stores in the area, including one in Deerfield and another in downtown Chicago. They have all be frequent targets for thieves. Lemonis tweeted Monday morning, saying, "Three robberies in Hinsdale, five robberies and looting in the Chicago store and three in Deerfield."

But he also insists he will be not be deterred. Another tweet reads, "I'm not closing any of the three Chicagoland stores. Even though collectively they've been robbed or looted almost 10 times in the past 24 months."

The latest robbery also shook other merchants in downtown Hinsdale, and now the chamber of commerce is organizing a meeting with merchants and police later this week.

Police said they got a call about a suspicious vehicle downtown and tried to pull the driver over, but the car took off at a high rate speed toward the expressway. They now believe the burglary suspects were in that vehicle.