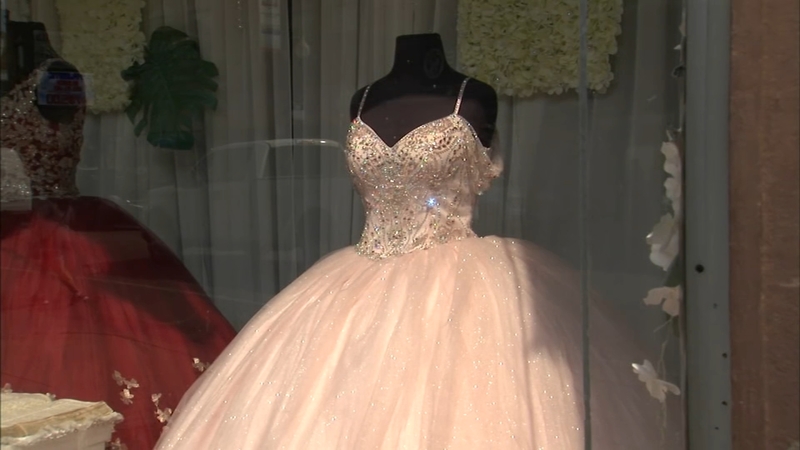 CHICAGO (WLS) -- The push to count the Latino community in the 2020 Census has reaching a fever pitch as the Sept. 30th deadline approaches.

Politicians, including the governor and Chicago's mayor, are pushing hard, while one community member has launched a free Quinceañera giveaway.

"We are giving away a full-blown Quinceañera, everything from the dress to the shoes, to the rosary, to the cake, to the DJ, to the videographer," said Cesar Rolon, a Chicago businessman who created the giveaway website. "Everything a young lady wants for a Quinceañera, except for the social gathering."

To win, people must fill out the 2020 Census, get the Census registration number, and that number is entered on the Quinceañera website, Rolon said. So far, he said 400 people have entered, and more are expected to apply for the Sept. 30th giveaway.

While there is only one winner, Rolon said everyone wins because each entrant will get more than $1,000 worth of coupons. He said it has pushed the younger generation to lean on their parents to complete the Census.

"Killing two birds with one stone," said Joselyn Varrera, a young student who agrees with the multigenerational push. "You're helping the children paying for the Quinceañera, which is a very special moment in any Latino culture. And you're helping provide more resources for the community as well."

Along with the Quinceañera giveaway, elected leaders are out in full-force, trying to convince Latinos, including undocumented immigrants to come forward. A Census 2020 event was held in Little Village Wednesday afternoon. The governor and several elected officials attended the event. Chicago's mayor used a sports metaphor to get her point across.

The census count in Chicago is lagging behind the rest of Illinois, particularly in Black and Hispanic neighborhoods in the city.

Frederick Velez III Burgos, the national director of civic engagement with the Hispanic Federation discusses the importance of filling out the 2020 Census.

"We gotta make sure we get into the red zone, into the end zone and score," Mayor Lightfoot said, "and the only way we can do that is to make sure we're counted."

Illinois' response rate is 70%, which is slightly higher than the national average. But the city's rate is roughly 59% with some neighborhoods hovering around 30%, according to The Chicago Tribune.
Those neighborhoods include the largely Black West Englewood neighborhood and Little Village, which has a large Hispanic population.

"We have a saying that 'Your voice is your vote,'" said Sylvia Puente of the Latino Policy Forum. "Well, Census is going to bring resources and revenue and power to our community.

Puente pointed to the amount of money lost or gained during the process. If one person does not complete the Census, that's $1,400 lost per person, according to a survey conducted by George Washington University.

Over 10 years, that number jumps to $14,000, said Oswaldo Alvarez, the Illinois Census Director who is familiar with the study.