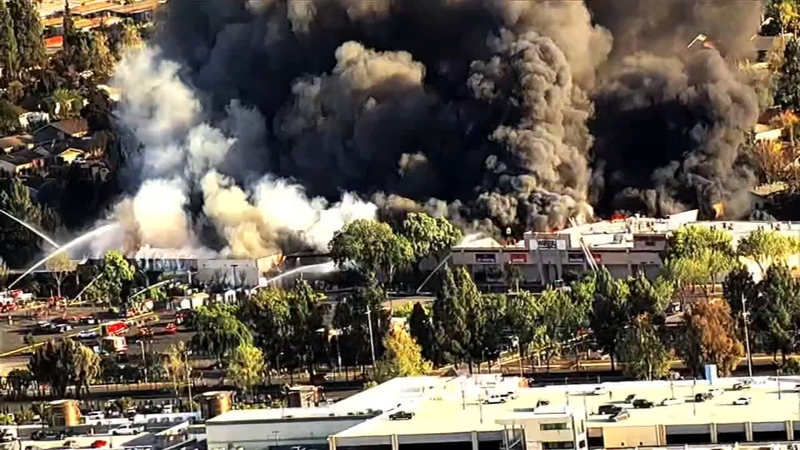 SAN JOSE, Calif. -- District Attorney Jeff Rosen said he was thankful to announce the arrest and charging of a suspect in the giant five-alarm Home Depot fire in California on April 9 "that caused tens of millions of dollars of damage and sent employees and customers running for their lives."

The Santa Clara County district attorney said the suspect has been identified as Dyllin Jaycruz Gogue.

Rosen said Gogue lit the fire in an aisle inside San Jose Home Depot and was trying to steal tools.

"Miraculously, no one was hurt in this five alarm fire that was so hot and so large...Far, far too close to causing many injuries and deaths," he said.

"Within days, investigators with San Jose Police Department and ATF had a suspect using a warrant. San Jose PD arrested Gogue on Friday, April 15, less than two weeks after his horribly reckless and criminal behavior, left Home Depot a burned out shell."

Rosen said the suspect will be arraigned this afternoon.

Previous story down below.

A person suspected of igniting the massive five-alarm fire that destroyed a Home Depot in San Jose has been arrested, according to authorities.

The announcement on Monday comes just days after the Bureau of Alcohol, Tobacco, Firearms and Explosives became involved in the investigation into what caused the devastating blaze.

The Home Depot fire was also hectic for Wagly, a veterinary hospital and pet campus next door where dozens of animals had to be evacuated in a hurry.

District Attorney Jeff Rosen along with the ATF, the San Jose Fire Department, Mayor Sam Liccardo, and the San Jose Police Department will be holding a news conference on Tuesday to release more details about the arrest and the charges against the suspect.

The ATF and San Jose Fire have asked that people who were at the Home Depot when the fire started, come forward and give their account.

Witnesses who spoke with ABC7 News claimed there was no immediate fire alarm and no sign of active sprinklers. The fire department said that is all under investigation.

"We were watching the ceiling come down in flames before any alarm came on," said Jeff Bahm, who was inside during the fire. "It wasn't until maybe three minutes after we left, this giant plume of smoke came rushing out to the front and then we all knew it is time to leave."

"In this case, if in fact true, not having any suppression within the sprinkler systems... It's like, what happened? Was it overwhelmed? Was it not enough? Or was it shut off? I think those are the things that the fire department- now with ATF help- are gonna come out and present at some point," Schapelhouman shared.

When that time comes, he said what is ultimately identified could lead to widespread improvements.