Prepaying property taxes now could save you money 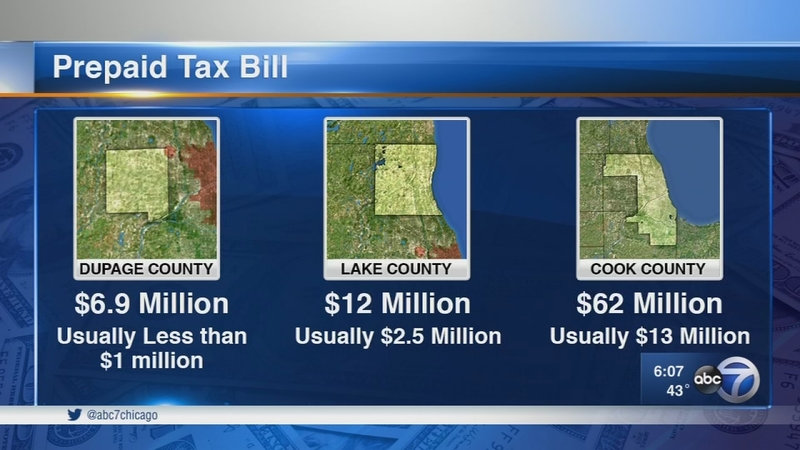 Prepaying property taxes now could save you money

TINLEY PARK, Ill. (WLS) -- One of the key issues in the sweeping GOP tax bill is the itemized deductions for property taxes and state and local taxes. The bill would put a cap on those, which has many homeowners scrambling to pay their taxes early.

Dawson, of Tinley Park, has a lot more to think about than just settling in to her new home with the tax law on the brink of a major overhaul. She's also thinking about her property taxes.

"We have kids, one child in college and we have another one here in high school, so to definitely pre-pay and save more money for us would help us in our budget in the long term," Dawson said.

The tax bill would put a $10,000 cap on the combined deductions for property taxes and state and local taxes. That means county treasurers are seeing a lot more checks this month as people pre-pay their property tax before the years' end.

"Now the floodgates are open because they see that deduction being ceilinged so now we're getting, we've never had calls like this," Will County Treasurer Steve Weber said.

In Will County, homeowners have already prepaid $1.5 million in taxes and the treasurer is expecting that to top out at more than $5 million. That's compared to $2.5 million in an average year.

In DuPage County, $6.9 million has come in already, when it's usually less than one million per year.

In Lake County, the treasurer reports receipts of $12 million compared to $2.5 million.

And in Cook County, where a new electronic prepay system is now in place, a whopping $62 million in prepaid property taxes have come in, compared to the $13 million that is usually paid early.

Prepaying your property taxes may not be the best move for everyone, so county treasures are recommending that people check with their accountants first.

"The higher income folks, the folks that have the higher real estate taxes have the greatest potential to benefit," said Daniel Hawtree, a certified public accountant.

Hawtree said homeowners earning more than $150,000 have to be careful because they could be subject to the Alternative Minimum Tax, which could negate any savings from prepaying their property taxes - but he says the majority of homeowners will probably benefit.