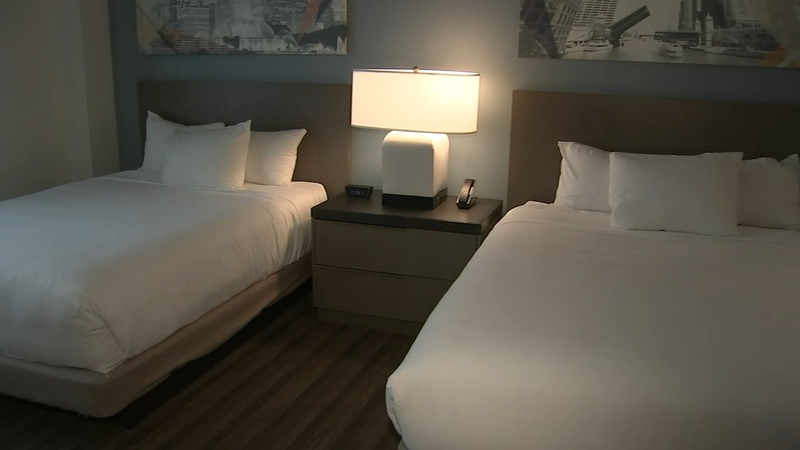 Chicago hotels have lower occupancy compared to other major cities

Chicago is facing a triple threat when it comes to filling hotel rooms right now: winter weather, stricter COVID mitigations and crime in the city, according to the Illinois Hotel and Lodging Association.

"Of all our major competitor cities, Chicago ranked dead last in hotel occupancy. It just shows you we're hurting far more here than really any other city across the U.S," said Michael Jacobson, President & CEO of the Illinois Hotel and Lodging Association

For the last two weeks, Jacobson said Chicago has been last in hotel occupancy when compared to all those cities. He said the situation in Chicago is so dire, some hotels are experiencing single-digit occupancy rates right now.

While the city has never been a winter destination for tourists, the downturn in hotel occupancy isn't just about the weather.

In Chicago, COVID mitigations are in place that impact establishments and venues like restaurants, gyms, commercial event and party venues. Effective January 3, 2022, everyone 5 years and older is required to show proof of vaccination to enter those public spaces.

Nilesh Pandey, general manager at Hyatt House and Hyatt Place Chicago Medical District, which used to be the old Cook County Hospital, said occupancy rates for the Hyatt establishments are in the double-digits and are higher now when compared to 2020.

"Winter is already slow in Chicago as it is, but Omicron has slowed down and postponed some of our events," Pandey said. "This year's occupancy is a little bit better than last year, and we think it's going to continue to grow more next year."

New numbers released this week showcase the struggle for Illinois hotels. In 2020-2021, hotels in our state lost $5.4 billion in room revenue and 24,000 jobs, according to the American Hotel and Lodging Association.
"There are a lot of hotels that are back in the single digits in weekly occupancy, which is not sustainable," Jacobson said.

The concern is real among hotel operators, including Bob Habeeb, CEO of Maverick Hotels, which runs Sable at Navy Pier as well as Lirica and Offshore Rooftop.

"The underlying health of the industry is questionable right now, and there are some people who probably won't make it to the other side of this pandemic," Habeeb said.

It's not just the winter weather and omicron. Hotel industry insiders are also concerned about safety in Chicago, and high profile crimes that sometimes get national attention.

"We're hearing from more and more meeting planners, and individual leisure travelers who are saying they are scared of coming Downtown right now," Jacobson said.

When you consider the bigger picture, Jacobson said it's also about conventions and large-scale events scheduled in the city. Conventions are booked years in advance.

"We don't know how many candidate city lists Chicago is not making because of the public safety issues going on now," Jacobson said. "That will cause repercussions for years, if not decades."

To bolster the industry, Jacobson said the Illinois Hotel and Lodging Association is asking the state to allocate $250 million to help the industry.

"It's impossible to make up for these two years in lost revenue," Jacobson said. "That's where we need some emergency support from the state to help make up for those losses and support our workers."

Back in the medical district, Pandey's staff at the old Cook County Hospital is ready for more visitors. The historic building now features a museum, showcasing the old hospital's artifacts and medical equipment.

Pandey praised his staff for continually learning and adapting to the latest changes and COVID mitigations as well.

"Most of them have been here since we opened," Pandey said of his fellow employees, "and they've been resilient to all the challenges thrown our way."

Navy Pier has long been a Chicago attraction. Habeeb is reassured it will stay that way, but he said there is still a hill to climb right now.