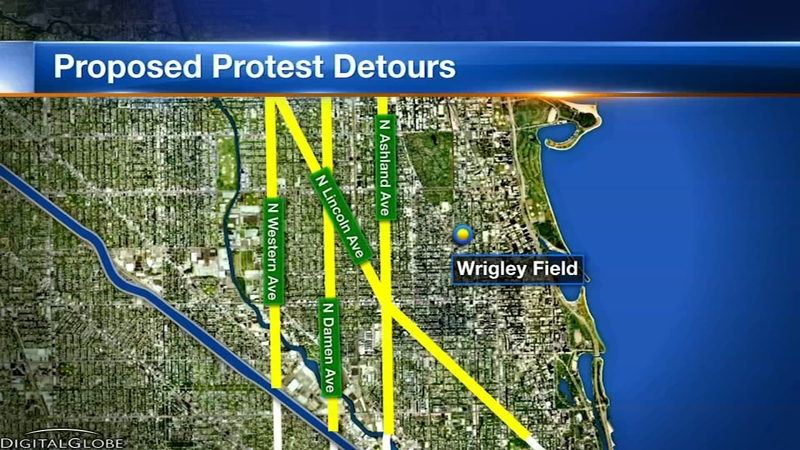 CHICAGO (WLS) -- Anti-violence protesters plan to shut down a portion of Lake Shore Drive and streets around Wrigley Field on Thursday, at the height of rush hour. The planned march could create a traffic nightmare. Here are several suggestions on how to avoid the gridlock.

North Lake Shore Drive handles an average 140,000 vehicles a day. If a planned protest shuts it down at Belmont Avenue, there aren't that many nearby detours to filter all that traffic. Your best alternates may be a little inconvenient, but a lot less congested.

Organizers said protesters will gather at Belmont, march onto northbound Lake Shore Drive around 4 p.m. and block traffic there for a period of time. They then plan to travel west on Belmont to Clark Street and north on Clark to the ballpark.

There are several streets west of Wrigley Field that will get drivers around any street closures. These include Ashland, Damen, Lincoln and Western avenues. The farther west you go, the easier it may be to get around.

Driving to the game is not recommended. Even CTA buses will get caught up in the reroutes, including the No. 147 Outer Drive Express, the No. 22 Clark and the No. 77 Belmont. Instead, take the CTA Red or Brown lines or Metra's Union-Pacific North Line.

There are several street closures in Grant Park for Lollapalooza, so the northbound drive will not be the only concern. Lake Shore Drive will remain open during the festival, but traffic will be very congested with crowds arriving - and especially when they leave.

"You should expect Michigan Avenue to be shut down between Randolph and Roosevelt around 9:15 p.m., 9:30 p.m. every night to help get the crowds out of there," Guidice said.

There will also be restrictions for trucks during Lolla. Nothing larger than a cargo van will be allowed on Michigan Avenue from Randolph Street to Roosevelt Road.

Organizers said they began planning this march after the fatal police-involved shooting of Harith Augustus, a local barber in the South Shore neighborhood. They selected this route to raise awareness on the Chicago's North Side.

Reverend Gregory Livingston, one of the organizers, called for the resignation of Chicago Mayor Rahm Emanuel and Chicago Police Superintendent Eddie Johnson. He said they have failed to reduce violence in the city.