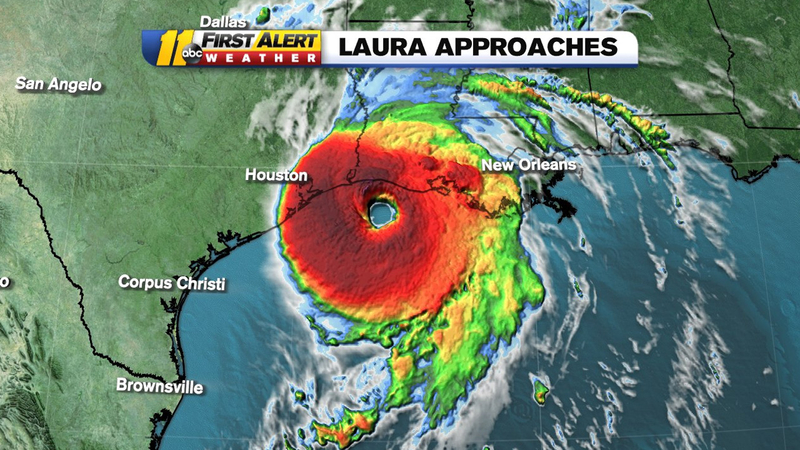 The National Hurricane Center said the storm made landfall near Cameron, Louisiana. It had maximum sustained winds of 150mph (240 kph), making it the most powerful hurricane to strike the U.S. so far this year.

The storm's power has raised fears of a 20-foot (6-meter) storm surge that forecasters say would be "unsurvivable" and capable of sinking entire communities on the Texas and Louisiana coast.

Galveston, Texas has already issued a mandatory evacuation, instructing all residents to leave the island Tuesday.

Forecasters warn that seawater higher than a basketball hoop could swamp entire communities.

WATCH: What is the Saffir-Simpson scale for hurricanes
EMBED More News Videos

When it comes to hurricanes, one of the biggest questions is what category it will be. Hurricanes are categorized using the Saffir-Simpson scale, which is based on sustained wind speed.

Towns near the Louisiana-Texas state line are bracing for the worst. Laura already killed at least 11 people in the Dominican Republic and Haiti, where it knocked out power and caused flooding in the two nations that share the island of Hispaniola.

Laura would transition to a post-tropical depression and work its way through the Ohio River Valley and could race east to bring North Carolina some rain Friday night into Saturday. Laura could carry tropical-storm-force winds into Arkansas

Fujiwhara effect: Can 2 hurricanes merge into a megastorm?

5am Update from @NHC_Atlantic on #marco #laura Both of them are still tropical storms and both are moving closer to the US #Tropics pic.twitter.com/stFqFkWJzw

Marco brought heavy rain, gusty winds and significant storm surge to parts of the gulf coast Monday night into Tuesday morning. Marco made landfall near the mouth of the Mississippi River, close to New Orleans around 6 p.m. Monday night but the ragged storm continued to weaken.