Jackson is the son of Reverend Jesse Jackson Sr.
WLS
By Craig Wall 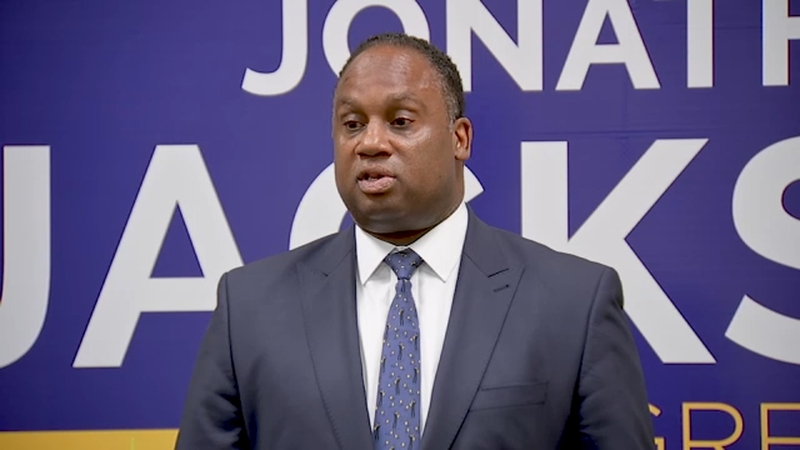 CHICAGO (WLS) -- Congressional candidate Jonathan Jackson is responding to criticism about his campaign disclosures and support he is receiving from dark money groups tied to cryptocurrency.

Now, Jackson is trying to quiet the controversy with the Primary just five days away.

The son of the Reverend Jesse Jackson Sr. was on the defensive Thursday after receiving more than a million dollars in last-minute support coming in the form of TV ads and flyers paid for by dark money groups tied to cryptocurrency billionaires.

"These are independent expenditures, they are not directly related to my campaign. I did not seek their funding and have not rejected because I can't, it is independent," said Jonathan Jackson, (D) Candidate for 1st Congressional District.

Jackson is one of 17 total candidates in the first congressional district race.

One of Jackson's political rivals called him out and called on Bernie Sanders to rescind the endorsement he gave to Jackson, who he held a rally for in Chicago last weekend.

"So you can't stand with Bernie Sanders one day, railing against billionaires and claiming to be ultra-progressive, and then the next day essentially be coordinating with this super PAC focused on cryptocurrency," said Karin Norington-Reaves, (D) Candidate for 1st Congressional District.

Jackson also responded to criticism for failing to file his financial disclosure forms in a timely fashion.

"I have made a mistake and it's a lesson learned. I did not realize that these documents were so extensive. They have now been filed," Jackson said.

Another candidate in the race said Jackson comes from a political family and has no excuse.

"So, when I look at some of the entries, I can see why there might have been a delay. He's invested in oil and gas and big pharma. So, and then he also calls himself a progressive, so I find that somewhat hypocritical," said Jacqui Collins, (D) Candidate for 1st Congressional District.