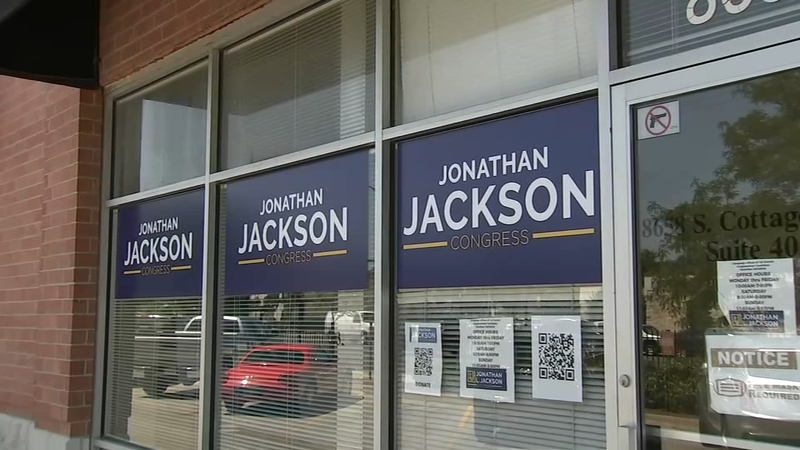 CHICAGO (WLS) -- Some dark-money groups are pouring $1 million dollars into the Democratic primary for Illinois' First Congressional District to boost Jonathan Jackson in the final week before the election.

Jackson has been facing scrutiny about the pair of dark-money political action committees that have combined to spend $1 million dollars to produce and air TV commercials for his campaign in the home-stretch of the primary.

The first is funded by crypto currency billionaire Samuel Bankman-Fried. The second PAC is funded by another crypto CEO. Businessman Jonathan Swain, one of the top fundraising candidates in the race, said voters should be concerned.

"They have to ask the question, why the nth hour do bitcoin and cryptocurrency interests want to invest this amount of money in selecting the next congressperson from the first congressional district?" Swain said.

Jackson's office said he was unavailable for an interview, he instead issued a statement saying, in part, "By definition, an independent expenditure is just that, independent. We did not seek it and we cannot control it."

Jackson's statement went on to say that his message focuses on quote "gas guns and groceries," but his website suggests other priorities. The very first one listed is about digital currency and the opportunities it offers for communities of color.

"I don't, have nothing to do with cryptocurrency," said Michael Evans, who was waiting for a bus near Jackson's office in Chatham.

Other candidates in the race said what voters are most concerned about is inflation, crime and economic development.

"And it seems to me that Jonathan Jackson has put a for sale sign on his seat on this congressional seat," said Pat Dowell, a Democratic candidate for the First Congressional District.

Jackson has also been drawing scrutiny for his failure to make timely campaign finance disclosures as required by the Federal Election Commission.

"We don't know his motivations, but it's fair to assume that he is not interested in telling the voters where his money is coming from. And now that it has emerged that these PACs this dark money is behind him, it raises even more questions," said David Greising, president of the Better Government Association.