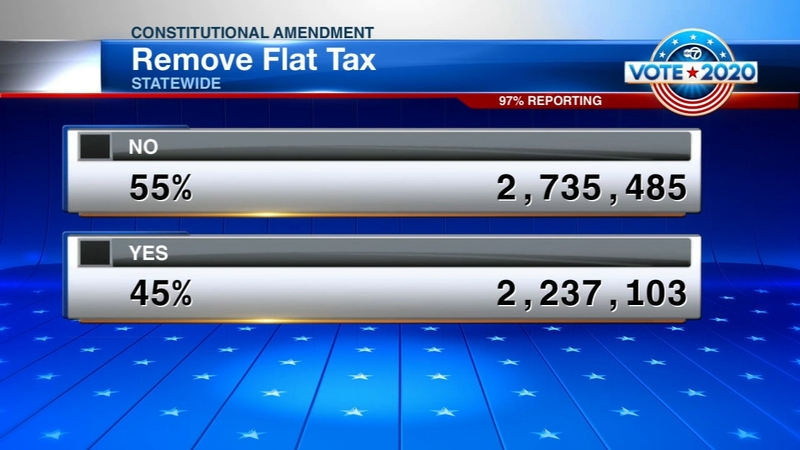 CHICAGO (WLS) -- Illinoisans voted on changing the state constitution to move from a flat tax to a graduated income tax, where the wealthy pay more, Tuesday, and Republicans claimed victory.

"In these times, these very challenging economic times, when you start talking about tax of any kind, people turn off," political analyst Laura Washington said.

"(It) requires 60% of the people that vote to say yes, which is a huge hurdle; or more than 50% of everybody that votes. That's a more difficult task as well," said Thom Serafin, another political analyst.

The results of the vote might not be known until mail-in ballots are counted, but Illinois Republicans already considered it a victory late Tuesday.

The flood of support in ads for the tax was almost entirely funded by a $56 million donation by Gov. JB Pritzker. Ads opposing the amendment were largely being funded by fellow billionaire Ken Griffin, who has given more than $46 million to an anti-tax coalition.

"I think there's misrepresentations and spin on both sides in these ads, and it's very difficult for voters to be able to decipher what's real and what's factual," Washington said.

Griffin, the founder and CEO of Citadel, sent an email to employees, obtained by ABC7 and confirmed by a company spokesman, slamming Pritzker.

The email said in part:

"I am not willing to stand by as, once again, spineless politicians try to sell a trick disguised as a solution. Particularly not from a Governor who, having inherited a great deal of wealth, has worked so diligently to avoid paying taxes himself."

A source close to Griffin said he paid more than $100 million in state income taxes last year. Pritzker and his wife reportedly paid just over $118,000.

Jordan Abudayyeh, press secretary for the governor, responded in an email saying:

"Personal attacks and lies don't change the facts. Governor Pritzker has made major strides repairing the damage that Ken Griffin's friend Bruce Rauner inflicted on Illinois and he is committed to making sure that the middle class doesn't pay to clean up their mess."