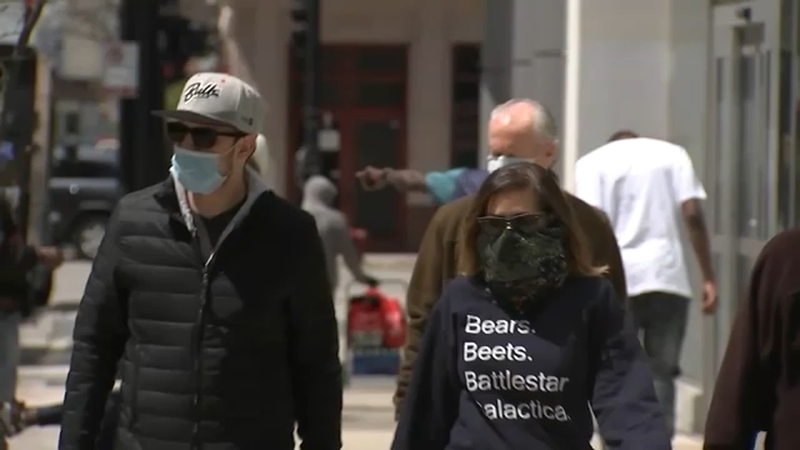 INDIANAPOLIS (WLS) -- Indiana is relaxing some of its COVID-19 regulations as the governor prepares to lift the statewide mask mandate Tuesday. However, local governments and businesses can still require them.

The advisory from Governor Eric Holcomb allows municipalities to make their own rules on where and when Hoosiers will have to mask up.

"I am appreciative that he lets the local authorities make their own decisions, but I think it sends a mixed message to people that we are at the end," said Gary Health commissioner Roland Walker.

Right now, Walker said he is keeping a close eye on the rising number of COVID-19 cases, adding that he's seen two large spikes in the past few weeks.

The City of Gary, like several other communities, has decided to keep their mask mandate in place for the foreseeable future.

"[We're] relaxing some of the restrictions on capacity at restaurants and bars, but leaving the mask mandate,' Walker said.

The advisory will still require masks in schools and state-owned buildings, as well as at COVID testing and vaccine sites.

"The neighboring areas, as long as we have similar rules, can alleviate confusion," Walker said.

COVID-19 killed nearly 13,000 people in Indiana over the past year.

"My wife was sick of COVID and her friend died of COVID," said Indiana resident Demetrius Smith. "It is a good thing to keep it on."

Many said they are still dealing with side effects of the virus -- which is still spreading.

"We all have mask fatigue. I do not want to wear this thing anymore but I also do not want to get anyone sick or getting sick myself," said fellow Indiana resident Mike Dean. "It was not fun and my daughter still has issues six months later."

The battle is not over yet.

"I think because masks are so simple people don't think that it works. But it works to stop the spread," Walker said.

Gov. Holcomb is sticking by his decision to lift the statewide mask mandate despite concerns from health experts about more contagious coronavirus variants and a request from President Joe Biden for states to keep such rules in place.

Holcomb said Wednesday that he also had not heard from Kentucky Gov. Andy Beshear since his comments Monday hoping that Holcomb would reconsider the dropping of Indiana's mandate starting April 6.

Holcomb said Beshear had his cellphone number and was welcome to call, but that he wasn't looking to change his mind.

Overall, 12,668 Indiana residents have died from COVID-19 and 691,625 have contracted it since the start of the pandemic.

Data released Friday by the Indiana Department of Health show a seven-day average of 988 new infections as of Thursday, up from an average of about 750 two weeks ago.

Hospitalizations were at 697, after falling below 600 for several days in mid-March.

The increases come as Indiana prepares to lift the statewide mask mandate next week.

But both figures are down more than 80% from December peaks. Indiana's average daily COVID-19 deaths have dropped from more than 100 a day to fewer than 10 a day since then.

IN COVID vaccine eligibility expanded to all residents 16 and up

Residents can make an appointment by dialing 211 or visiting the state website ourshot.in.gov.

The state is no longer requiring proof of residency to be FEMA compliant and to help people who may not have documents mailed to their address.

"The more people that are vaccinated, the less likely the increase spread of disease," Garcia Burns said. "Our COVID cases are ticking upward, so it's important."

Indiana lawmakers have advanced legislation that would make it easier to overturn local health orders or enforcement actions.

The move comes amid complaints from conservatives about Republican Gov. Eric Holcomb's statewide response to the coronavirus.

The Senate bill creates a process allowing the public to appeal local health orders to county or city elected boards. Such orders can include citations, fines or an order to close a business. After an appeal is filed, the enforcement action is halted until the matter is resolved.

That could allow a business to stay open until an appeal is heard by a city or county board, even if it is not following health orders.