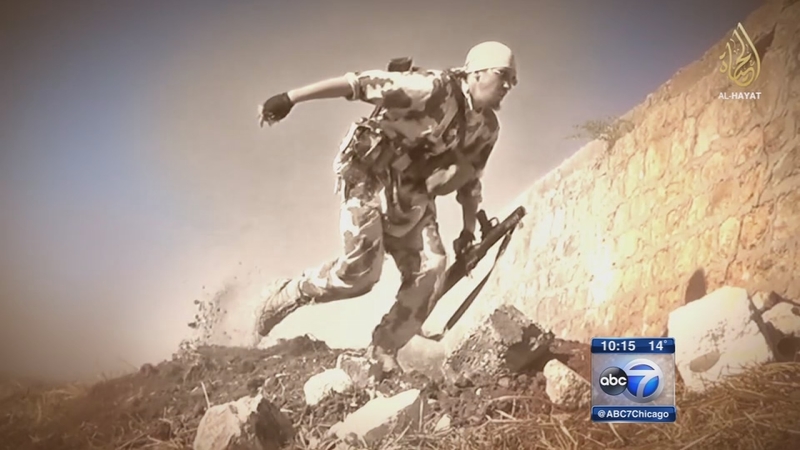 CHICAGO (WLS) -- Terrorists are taking pages from a Hollywood playbook to recruit new members in Chicago and across the U.S. The U.S. Defense Department is spending millions to understand "The ISIS equation."

New evidence has determined that ISIS recruiting videos are built on the same story formula as Hollywood movie scripts. That discovery, which is part of deep research being done in Chicago, could shape how the government fights terrorism.

University of Chicago researchers tell the I-Team that creators of an ISIS propaganda video followed a famous 12-step Hollywood guide on how to tell the story of a hero -- a scripting formula used for decades in blockbuster movies including "Titanic," "Wizard of Oz" and the first "Star Wars."

Dana Rovang, of the University of Chicago, discovered the disturbing connection after watching hundreds of videos produced by terrorist groups.

"What we found was that the Abu Muslim video strictly followed the 12-step progression of the Chris Vogler Hollywood memo," Rovang said. "Now, what we are seeing is ISIS teaching itself Hollywood techniques."

Rovang compares ISIS's Abu Muslim video to Hollywood hits using what is known in film-making circles as "The Hero's Journey."

Both begin as heroes in their ordinary worlds, then follow the path of adventure, encouragement, tests and eventually a resurrection and returning home with "special information."

"They've gone to the movies so they are using what they know in order to speak in a narrative language we know," Rovang said.

The Pentagon recently gave U of C a grant for nearly $3.5 million to figure out who is most susceptible to being recruited by terrorist groups.

"The ultimate goal really is to understand in a powerful way what inspires individuals to have sympathy for ISIS and other terrorist groups by watching videos," said Robert Pape, director of the university's Chicago Project on Security & Terrorism.

Pape, a terrorism expert, said ISIS is pitching an idea of personal empowerment in these videos.

"One of the early warning signs of people who have ended up becoming arrested is watching videos, jihadi videos," Pape said.

Authorities don't know why, but Pape said he hopes to find out.

Researchers will be looking at which areas of the brain light up when watching the videos and do those sections control emotions or intelligence. Information terror investigators need, but don't have.

"That process of taboos becoming socially approved, that's something that's in the province of social science to understand," Pape said. "That's not something you are going to get from a CIA analyst."

In the past three months, ISIS has released at least 150 recruiting videos aimed to reach the widest possible audience.

"They have an understanding of what will produce emotions in people and what arguments are going to resonate," Rovang said.

"They're kind of skewing that to making you think being a better person is to join this army and turn your back on your parents and society and maybe do violent things, so that's, that's disturbing aspect," Tolchinsky said.

U of C researchers hope what they learn from this study will give authorities new tools to combat terrorism in the future.

However, it's an expensive fight. The Pentagon recently asked for a 50-percent budget increase to fight ISIS, spending $7.5 billion next year.

The Chicago Project on Security & Terrorism