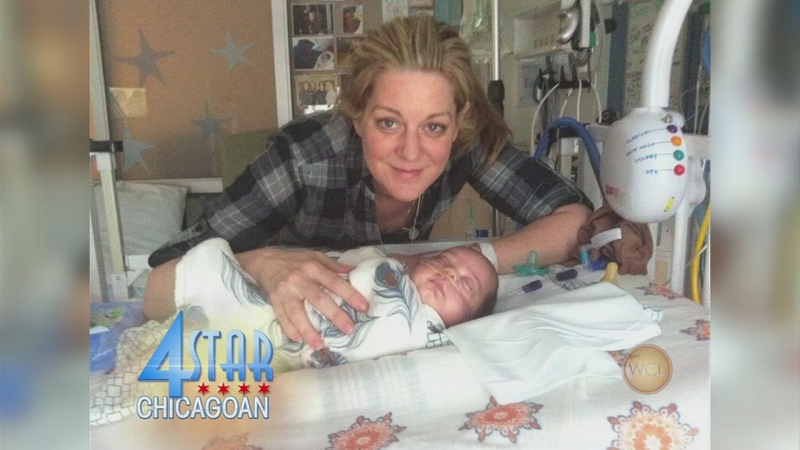 CHICAGO -- After spending thousands of dollars on parking while visiting her son at the Ann & Robert H. Lurie Children's Hospital, the Ukrainian Village mom now raises money to pay for parking for other parents who are bonding with their babies at the Streeterville hospital.

This busy working mom was selected out of tens of thousands of nominations and was named a CNN hero for her role in spearheading the Jackson Chance Foundation, a nonprofit named for her son, who died on Sept. 7, 2012, at just under 10 months old.

Meghie and her husband Terry started the foundation in honor of their son, Jackson Chance, who spent all but 48 hours of his short ten-month life in the NICU. They were fortunate to have the resources and support to spend each and every day with Jackson while in the NICU. During that time, they witnessed firsthand how many babies were without their parents due to the high cost of parking and transportation.

Meghie said that her family spent $2,000 on parking during the first two months that Jackson was at Lurie. A private donor "gifted parking passes" to her for the next seven months of Jackson's stay, where Meghie and her husband, Terry, were daily visitors.

In downtown Chicago, a family could spend upwards of $45 a day or $1,000 a month to see their critically ill baby before work, during lunch and after work. Because of the Jackson Chance Foundation, no family pays for parking or transportation at Lurie Children's hospital of Chicago while their baby is in the NICU.

Since its inception as a nonprofit in March 2013, the Jackson Chance Foundation has raised over $1.5 million and paid for tens of thousands of visits by more than 1,000 families whose children are patients in the neonatal intensive care unit at Lurie Children Hospital.

The foundation's mission is "to enrich the lives of families with babies in the neonatal intensive care unit by allowing them to spend more time with their baby," according to its website.

The foundation partners with the hospital to alleviate the transportation expenses of all families while their child is in the neonatal intensive care unit by providing parking and CTA/Metra vouchers.