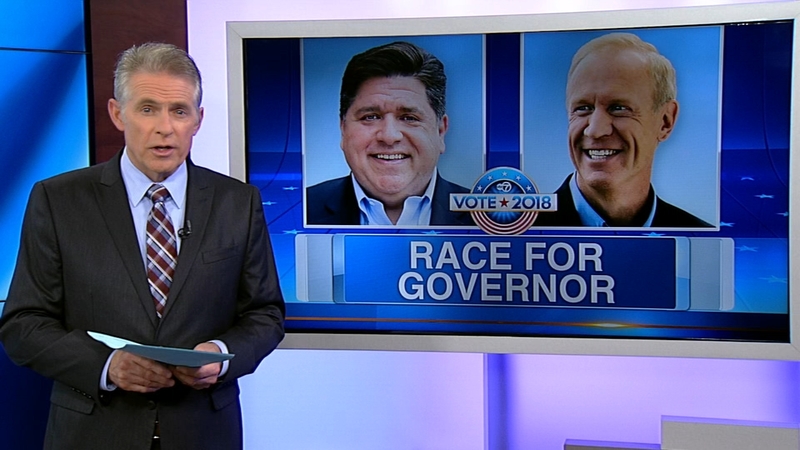 CHICAGO (WLS) -- With time running out before Election Day, Bruce Rauner and J.B. Pritzker crisscrossed the state in a final push for votes. They have just eight days left to make their case.

This week is really the home stretch for the candidates for governor, when schedules are nonstop, every voter matters in every part of the state and nothing gets taken for granted.

Rauner kicked off his statewide bus tour at a restaurant in Wheaton.

"Well the message is don't stay home, staying home basically is in effect voting for Madigan and Pritzker," he said.

Pritzker began his day in Northbrook campaigning door to door

"I'm really excited about all the enthusiasm among Democrats for voting, and for voting for Democrats up and down the ticket," he said.

Rauner is hoping to rally more support from voters than he did from the president Saturday at Trump's rally in southern Illinois, where the governor appeared to get snubbed.

"He was an hour late, he had to get right on the stage and I spend my time before he got there really thanking all our volunteers," Rauner said.
Pritzker called it a desperate move.

"Remember Bruce Rauner has been flip-flopping all along, first he doesn't want to say Donald Trump's name, now he wants to get on stage with Donald Trump but can't even get that done," Pritzker said.

As this bitter campaign hits the final stretch both candidates reflected on the negative political climate, casting blame at one another.

"Well when you have leaders like Donald Trump and Bruce Rauner, whose vitriol divides the country and divides the state, that's when you have these problems of people not willing to work together," Pritzker said.

"We can find common ground on policy differences and there we can be respectful and work together, we can't respect corruption, we can't respect those who engage in abusing the system for their own benefit," said Rauner.