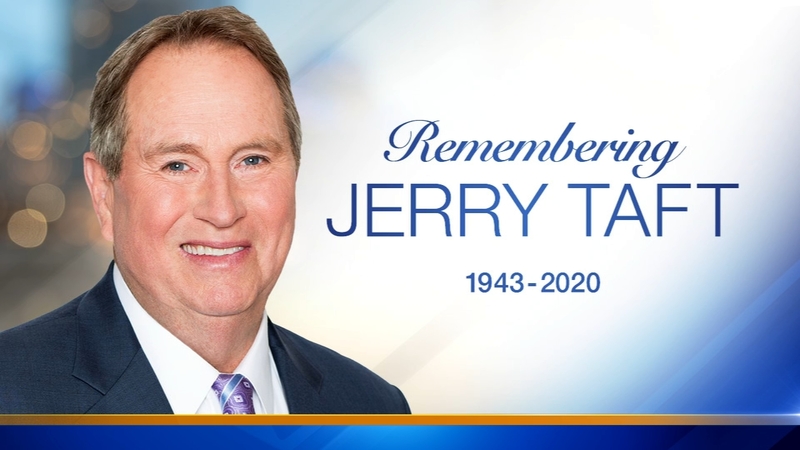 CHICAGO (WLS) -- Jerry Taft, who served as a meteorologist at ABC7 for 33 years before retiring in January 2018, died peacefully Thursday night surrounded by family members. He was 77.

Jerry is survived by his wife Shana and his children Skylar, Storm, Dana and Jay.

While reflecting on his career when he retired from ABC7, Jerry said he did not intend to become a television meteorologist and became interested in meteorology from flying airplanes.

He was a captain in the Air Force in Texas when he took the local weatherman in San Antonio up for a publicity flight for the military. Then, that weatherman turned the tables and put Jerry on the air.

Jerry was well-known for his sense of humor and his ability to laugh at mistakes.

"We always talk about Jerry's laugh and his great sense of humor, but the other thing is, he was a genuinely, a good soul," said ABC7 Traffic/Transportation Anchor Roz Varon. "I never heard him say anything bad about anybody ever, and he was a great mentor."

Jerry came to Chicago to work for NBC and moved over to ABC7 in 1984.

At the time of Jerry's retirement, Alan Krashesky said, "One of the things that makes him so approachable is the fact that he doesn't take himself seriously, he's taking what he does professionally seriously, never himself."

Also speaking when Jerry retired, Kathy Brock shared, "People remember the laugh, I don't know how many newscasts there have been where he gets the giggles."

"One thing Jerry took very seriously was keeping ABC 7 viewers informed and safe during severe weather," Krashesky said Friday. "An expert on the science, while bringing a lot of sunshine to our lives, even on the coldest cloudy days."

Chicago Mayor Lori Lightfoot chimed in, as well, saying "Jerry Taft was the definition of a class act. His love for meteorology and passion for our city always shined through."

Jerry Taft was the definition of a class act. His love for meteorology and passion for our city always shined through. My deepest condolences to Jerry's entire family and everyone at @ABC7Chicago. https://t.co/lJf32rJXZJ