Video shows moments after Smollett yelled 'I am not suicidal!' in courtroom outburst
WLS
By Chuck Goudie and Barb Markoff, Christine Tressel and Ross Weidner 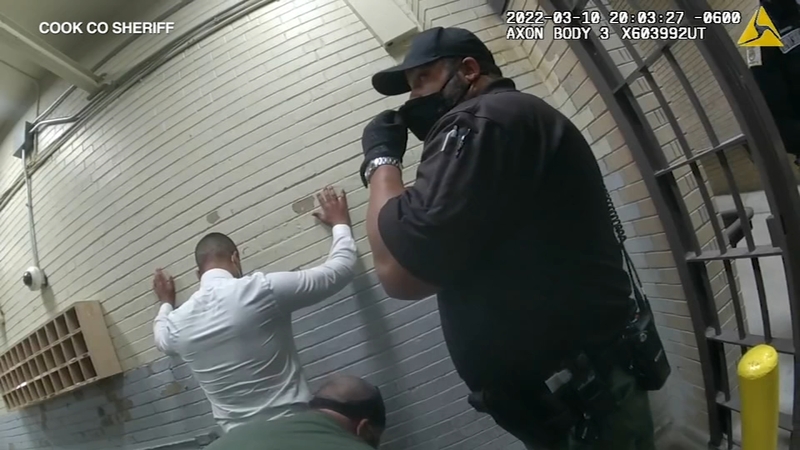 CHICAGO (WLS) -- TV star Jussie Smollett was patted down and processed just like any other criminal about to be locked up in the Cook County Jail.

There are video and audio recordings of the whole thing. One sheriff's deputy is heard reassuring Smollett he is "in safe hands."

Authorities took the unusual step after Smollett suggested he might not be safe while in jail.

After Smollett was sentenced on March 10, he yelled, "I am not suicidal!" His outburst was heard by millions, but what happened next is only being seen now.

A team of sheriff's deputies escorted Smollett to jail. Video and audio from a pair of body-worn cameras shows what looks like the opening scene of a prison movie.

The I-Team obtained the video under a Freedom of Information Act filing. Just minutes from his 150-day sentence for lying about a hate crime he made up and staged, Smollett is searched and then led through a long tunnel between court and jail, by deputies who say they do this on occasion.

"Mr. Smollett, we are the ERT team, the Emergency Response Team, we handle all the high-profile guys, we handled R. Kelly when he was here," one deputy said.

"The fact that he had made false accusations against people in the past and being a high-profile target, those two components of the situation I think would have documented this type of video and audio recording of the events," former deputy U.S. Marshal Ed Farrell told the I-Team.

Farrell has arrested hundreds of criminal suspects and says having audio of how Smollett was treated is important.

"You're documenting both sides, audio and visual, which gives a better recording to the public to ensure that they have transparency with what transpired," said Farrell.

At one point, the entourage guarding Smollett stops and orders oncoming employees to get out of the way. The video ends in a cell as Smollett is given his jail wardrobe.

Using bodycams to record prisoner transports is not typical. A spokesman for the Cook County Sheriff says they use appropriate safety and security measures, suggesting that cameras were in order for Smollett.

In Lake County, Illinois, jail officials say fixed cameras are used in certain areas, but body cameras are turned on only in very specific situations including medical emergencies or non-compliance.