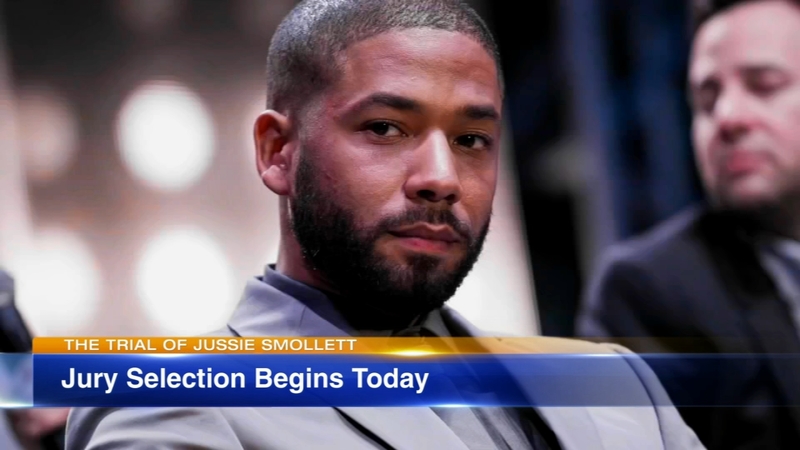 CHICAGO (WLS) -- The Jussie Smollett case began in January 2019 with a threatening letter and the alleged staged attack in Chicago's Streeterville neighborhood. Here's a timeline of key events leading up to the "Empire" actor's trial on disorderly conduct charges.

Jussie Smollett receives letter sent to the FOX studio in Chicago which had threatening language and was laced with powdery substance, likely Tylenol.

Smollett claims he was walking in Chicago's Streeterville neighborhood at about 2 a.m. when he said two people he didn't know started yelling racial and homophobic slurs at him. He told Chicago police that the attackers yelled "MAGA country."

Smollett told police the men struck him in the face with their hands and poured a chemical on him and one of the individuals wrapped a rope around his neck.

When Smollett contact police at about 2:42 a.m. he was still wearing the rope around his neck.

Chicago police release surveillance images of two persons of interest. Police said there was no video of an assault.

Chicago police confirm they are speaking with two persons of interest in the case.

Sources report to ABC7 that Chicago police are investigating if Smollett staged the attack.

A Chicago police spokesman releases a statement saying, "We can confirm that the information received from the individuals questioned by police earlier in the Empire case has in fact shifted the trajectory of the investigation. We've reached out to the Empire cast member's attorney to request a follow-up interview."

Cook County State's Attorney Kim Foxx announces that she is recusing herself from the investigation.

"Out of an abundance of caution, the decision to recuse herself was made to address potential questions of impartiality based upon familiarity with potential witnesses in the case," a spokeswoman told ABC News via email.

Prosecutors announce that Smollett has been charged with one count of disorderly conduct.

ABC7 Eyewitness News obtains surveillance video of the Osundairo brothers linked to the reported attack from a beauty supply shop. The video shows the brothers purchasing items possibly used in the case.

At a press conference, Chicago Police Superintendent Eddie Johnson says the actor initially faked a letter using racist and homophobic language. When that didn't get attention, Johnson said, Smollett paid two brothers $3,500 via personal check to stage the attack, because he was "dissatisfied with his salary."

"Empire" showrunners announce that Smollett's character, Jamal, will be written off the last two episodes of the season.

Chicago police announce that they have launched an internal investigation into leaks in the Smollett case.

A Cook County jury returns a 16-count indictment against Smollett.

The grand jury returned two separate sets of charges, one of each lie Smollett allegedly told. The first set are related to what Smollett told officers about the alleged attack, including that the attackers called him racial and homophobic slurs, struck him with their hands, put a noose around his neck, and poured some sort of chemical substance on him.

The second set of charges are related to the second interview Smollett had with police about the alleged attack later that day, saying the men attacked him from behind and he fell to the ground, at which point the men continued kicking him. Smollett also told police on this occasion that one of his attackers was white.

Smollett appears in court and pleads not guilty to the 16-count indictment.

Prosecutors announce that they have dropped all 16 charges against Smollett.

Cook County prosecutors said charges were dropped after reviewing the circumstances of the case as well as Smollett's community service and forfeiture of his bond.

Mayor Rahm Emanuel criticizes the decision to drop charges, calling it a "whitewash of justice."

CPD officials release a portion of its investigative file on the Smollett case in response to a FOIA request from the ABC7 I-Team.

In the 61 pages of field reports, CPD detective chronicle their steps in the investigation and their contact with key players in the case, including Smollett.

The City of Chicago sends a letter to Smollett's attorneys asking that the actor pay $130,000 to offset the cost of the investigation after he reported being attacked in Streeterville.

Smollett's attorney Mark Geragos responds to the city's threat to file suit, saying if the city sues he will depose Mayor Emanuel and Chicago Police Superintendent Eddie Johnson, and will demand the "entire investigation file."

Chicago files a civil lawsuit against Smollett demanding that the actor pay the city $130,000 for the cost of the investigation.

City attorneys write in the suit, "Defendant knew his attackers and orchestrated the purported attack himself. Later, when police confronted him with evidence, he still refused to disclose his involvement."

In one exchange, just weeks before Foxx's office decided to drop all charges against the actor, Foxx wrote, "Sooo......I'm recused, but when people accuse us of overcharging cases...16 counts no a class 4 becomes exhibit A."

A Cook County judge orders prosecutors and police to unseal documents in the Smollett case.

The records were sealed shortly after charges against Smollett were abruptly dropped by prosecutors.

A Cook County judge rules that a special prosecutor will be appointed to review State's Attorney Kim Foxx's handling of the Smollett case.

Police bodycam video shows officers arriving at Smollett's apartment in Streeterville. After going with his manager up to his apartment, they are greeted by the star with a rope coiled several times around his neck, claiming that two attackers doused him with bleach and put the noose over his head.

Judge Toomin reached out to 101 public agencies and attorneys general throughout the state. Many rejected the request and others were not able. The judge said he then turned to those in private practice.

Attorneys for Smollett file a counterclaim against the City of Chicago in the lawsuit seeking reimbursement for the expenses used to investigate the actor's case.

In the counterclaim, his attorneys say that by allowing the city to keep the bail money, that payment prevents the City from collecting any additional damages.

A Cook County grand jury returns a six-count indictment against Smollett, charging him with making four separate false reports to Chicago police "related to his false claims that he was the victim of a hate crime, knowing he was not the victim of a crime."

Smollett appears in court to plead not guilty to the new six-count grand jury indictment. His bond was set at $20,000.

A countersuit filed by Smollett against the City of Chicago is dismissed by a federal judge.

However, Webb said he did not find evidence that would support criminal charges against Foxx or anyone working in her office. Webb also found there was no third party influence in any decision making.

A judge sets a trial date of November 29 for the Smollett case.