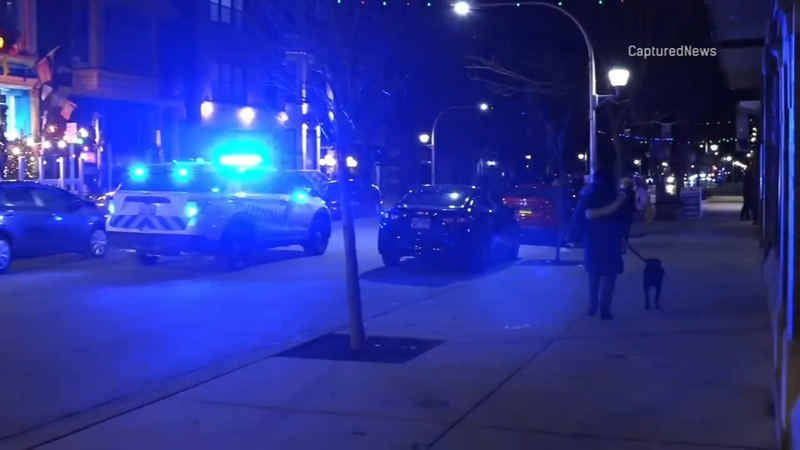 CHICAGO (WLS) -- Two more violent robberies were reported in Chicago's Lakeview neighborhood Wednesday evening as police warned about more than 20 similar attacks in the area over the past two months.

CPD officers swarmed the 3200-block of North Sheffield Wednesday night as they rushed to the aid of a young woman police say had been beaten and robbed by a group of people.

"As I was pulling up to work, I saw three young ladies talking to many police," said William Gold, who works nearby.

Police said just after 7 p.m. a group of eight surrounded a woman on the sidewalk of North Sheffield just a few yards north of Belmont Avenue. Investigators said two of them teamed up, pushing her to the ground, punching her and kicking the woman in the face as they stole her personal property, and quickly ran off.

"It was very quick," Gold said. "The police then drove off and I think they were probably looking for suspects."

About a half hour later around the corner at the Belmont Red Line stop, police rushed to reports of another group robbery. Police said a 31-year-old woman was riding the CTA Red Line when five people tried to steal from her. A struggle ensued, and when another woman tried to intervene, the suspects tried to rob her as well before giving up and fleeing the scene. No injuries were reported, and no one is in custody, police said.

"Sometimes the experience of the neighborhood is quite different from the reputation and I think when incidents like this happen, it can paint a picture that may not actually be the realty of day-to-day life here in Lakeview," business owner Virginia Carstarphen said.

But police are worried, as this is increasingly becoming a daily experience near East Lakeview and Lincoln Park.

Investigators were already trying to track down leads on two other violent robberies in Lakeview overnight, where within hours of each other, two victims were shot and robbed of their wallets and cell phones.

"It's a problem, though, and we've got to fix it," Carstarphen said.

Aldermen and local business groups are now teaming up with safety walks and security trying to keep each block a little more guarded, and customers protected.