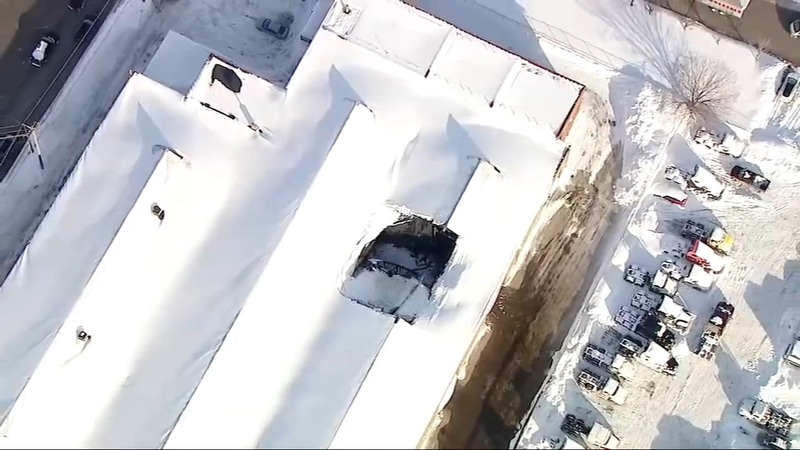 CHICAGO (WLS) -- Several roofs have collapsed under the weight of the heavy snowfall over the past few days.

The latest happened early Wednesday at a Lakeview condo complex.

The garage behind a six-unit condo complex collapsed on top of three cars and a motorcycle in the 3600-block of North Bosworth Avenue.

"We heard a loud pop, saw the building start to come down, saw the roof come down and the side wall basically blew out," one resident said. "We didn't expect it."

No one was injured, but this was one of many collapses because of the snow.

Another building collapse was reported on Chicago's South Side early Wednesday. Chopper7HD captured the apparent collapse about 7:30 a.m. in the 8100-block of South Hoyne Avenue in Englewood.
EMBED More News Videos

The roof of a building in Englewood appeared to have collapsed early Wednesday.

The Department of Buildings confirmed it responded to the building and determined the collapse was due to the failure of the bow truss roof system. DOB is working with the building owner to determine next steps for the building, which is actively used as a truck storage depot, a spokeswoman said.

Later in the 2500-block of North Damen Avenue in Lincoln Park, there appeared to be another partial roof collapse.

Between Monday and Tuesday at least three roofs collapsed across the city.

RELATED: Car buried in snow? Chicago mechanic shares what you should know before digging out, driving off

In the suburbs, two buildings collapsed in Elgin in the last week, and on Tuesday, the roof of an indoor equestrian riding facility buckled under the weight of heavy snow in Morton Grove.

For homeowners, finding the right company to remove snow and ice from your roof is essential.

Under the weight of heavy snow and ice, your roof is in real danger of collapsing or causing a water leak inside your home.

A roofing expert joined ABC 7 Chicago Thursday to discuss what to do during snowy Chicago weather.

Jesse Lofgren, a longtime roofer and president of the Ice Dam Steaming Association, runs Absolutely Clean Window Washing. He has snow removal videos on YouTube an said home and business owners should beware of who you hire to clear your roofs.

"The No. 1 thing you need to make sure of is that they are not running a pressure washer; you want to ask them about the trigger on the gun: An open gun is what you are looking for," Lofgren said. "If you do have water inside your building, don't panic. Don't hire the first company that says they can get there without verifying their equipment is indeed low pressure. So you want very high temperature and very low pressure. If you have the opposite, you're basically hiring a pressure washer that can destroy your roof."

His crews work all across the country, safely clearing off ice damming in extreme temperatures.

A Chicago roofing professional gave tips on what to do with heavy snow Wednesday.

He said you can take precautionary measures now, before you have a problem on your hands.

"If you are concerned about the weight of the snow on your roof, it's important to get somebody out there to remove it," Lofgren said. "Focus on the ice dams; if you have any signs of water coming down your siding, that's a very good indication you have ice damming on the roof, and it's very close to leaking inside your building."