Lollapalooza evacuated due to storms at end of 1st day

WLS
By Will Jones and Ravi Baichwal 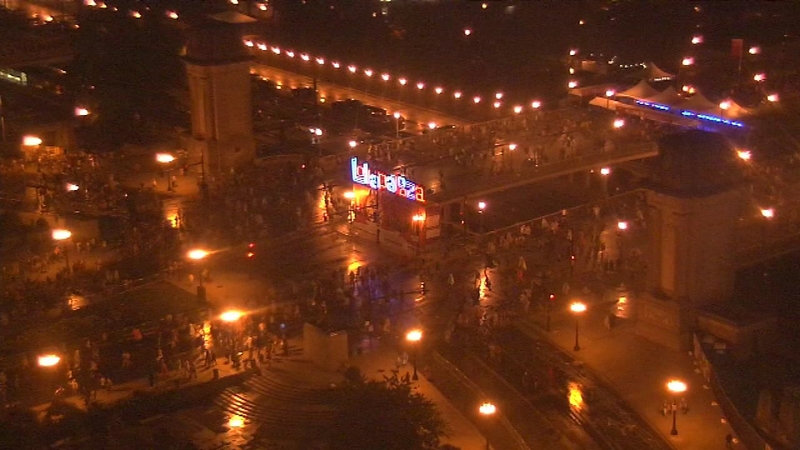 Lollapalooza evacuated due to storms at end of 1st day

CHICAGO (WLS) -- Lollapalooza organizers evacuated Grant Park just after 9 p.m. on the first day of the music festival due to weather, bringing the festival's first day of performances to a close early.

Grant Park is being evacuated due to weather. Please make your way to the nearest exit. https://t.co/U5S24qzchL pic.twitter.com/lhGRsJGBW5

Performances from headliners Lorde and Muse were already underway when the evacuation was ordered.

Organizers said they decided to cut the performances short due to an approaching storm and warnings from the National Weather Service.

"We are disappointed to have to end today's performances early, however our first priority is the safety of our fans, staff and artists," said Sandee Fenton, Director of Publicity for C3 Presents, the promoter behind Lollapalooza.

If there is severe weather or another emergency situation at Lollapalooza, there are shelter sites in underground parking garages around Grant Park.

There are signs to direct people to these locations. Safety officials will be available to give directions.

More than 170 performers will hit eight stages at this year's four-day music fest. Wiz Kalifa, Lorde, Muse and Cage the Elephant were a few of Thursday's headliners. CLICK HERE for the full concert schedule.
Gates opened at 11 a.m. Festival-goers will need wristbands to get in and will be subject to a security screening. Large bags are prohibited and all bags will be searched. Attendees can re-enter up to three times per day.

CLICK HERE for additional information on allowed and prohibited items, as well as tips for attending Lollapalooza, click here.

About 100,000 people are expected to attend Lollapalooza each day. Although general admission packages quickly sold out, there is an official ticket exchange where people can buy and sell tickets at lollapalooza.com.
"We have a plan of a schedule that we want to go see. But, you know, it falls to pieces and you really see whoever sounds good," said Blake Shreves, who arrived early for the music festival.

"The storms? Actually, I look forward to the storms. All the dirt on the inside turns into a mudslide. It's one big party. Love it," said Gavin Humfleet, who also arrived early for Lolla.