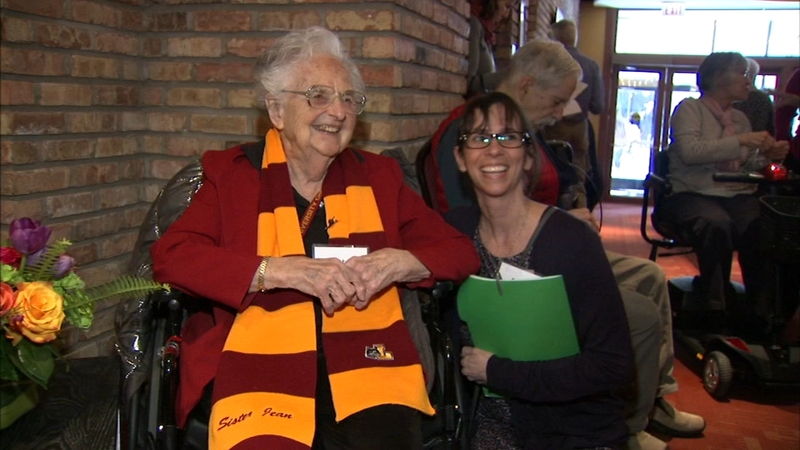 CHICAGO (WLS) -- Loyola's 98-year-old men's basketball team chaplain Sister Jean was recognized for not letting age get in the way of her life's work.

Sister Jean received the first ever Trailblazer Award from the group the Village Chicago.

Executive Director Dianne Campbell described Sister Jean as the "North Star" for everyone who wants to "maximize the dividend of a long life."

It's only appropriate that Sister Jean Dolores Schmidt be the first to receive this award, since she was the person who inspired it.

"She inspires, she works with young people, she chooses happiness every day," Campbell said.

The Trailblazer Award is just the latest recognition for the chaplain of the Loyola University Men's Basketball team who became known around the world at the age of 98. ABC 7 asked this inspiring woman, who inspires her.

"Sisters in my own community have, I have Jesuits who have. Students who have. And the team certainly has," she said.

The Village Chicago helps people remain vital, contributing members of their communities as they get older.

"I find it very rewarding. I just try to say, this is the way to go every day. And that's the way the team's looking at it too. They're accepting people's praise and gratitude very, very humbly," Sister Jean said.

Sister Jean said she liked the name "Trailblazer" and joked that everyone at the event could follow in her footsteps.