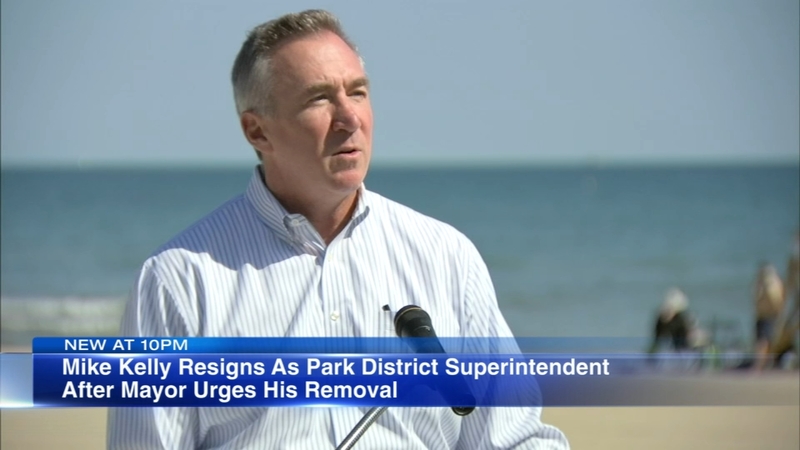 Kelly said in a statement to LaVelle that read in part "I have always had the best interest of our patrons and our employees at heart."

Lavelle said the board will move forward "in consultation with Mayor Lori Lightfoot to appoint an interim CEO to "give a heightened level of attention to the issues and concerns confronting the Chicago Park District."

Lightfoot had released a statement earlier in the day that said she urged the Chicago Park District Board of Commissioners to remove Kelly at an emergency meeting to discuss the handling of a sexual harassment probe involving park district lifeguards.

"The culture of sexual abuse, harassment, and coercion that has become pervasive within the District's Aquatics Department lifeguard program under his leadership, combined with the Superintendent's lack of urgency or accountability as new facts have come to light, is unacceptable."

In August, the district announced it was taking disciplinary action against employees in the beaches and pools unit.

The Chicago Park District is taking disciplinary action against employees in the beaches and pools unit.

That announcement came weeks ahead of an Office of Inspector General report's release looking into sexual harassment allegations from 2020 involving a female lifeguard who was a minor at the time.

Full Statement from Michael Kelly
Please accept this correspondence as my official letter of resignation, effective
immediately, from my position as General Superintendent and CEO. It has been an
honor to steward this extraordinary organization for the past ten years. It has also been
an honor to serve Chicagoans as a public servant for the past 27 years. I have always
had the best interests of our patrons and our employees at heart.

Full statement from Mayor Lori Lightfoot
Yesterday, I attended a pre-scheduled emergency meeting of the Chicago Park District Board of Commissioners. In that meeting, I urged the Board to remove from office the General Superintendent and CEO of the Park District, Mike Kelly, for cause.
The Chicago Park District provides thousands of Chicago residents with high quality programming every single day. Families trust the Park District with their precious children. They have a right to expect that their children will be safe and protected. Also, Park District employees deserve leadership who share their closely held values, namely, protecting our children against predators and bullies, and believing survivors of sexual abuse. Furthermore, in my administration, being a City or sister agency employee means you will have a safe workplace to show up to serve residents every day. As long as I am the Mayor of this city, survivors will be believed, abusers will be held accountable, and institutional culture will be changed to minimize any opportunity for harm to occur.
The culture of sexual abuse, harassment, and coercion that has become pervasive within the District's Aquatics Department lifeguard program under his leadership, combined with the Superintendent's lack of urgency or accountability as new facts have come to light, is unacceptable. Despite prior claims of new training, new procedures, and new personnel, the failings of the current Park District Administration's response to new allegations of harm to a child persists and simply cannot be tolerated one day longer. Therefore, in my estimation, it is time for new leadership immediately.
I look forward to the Board's swift and decisive action regarding this matter in order to ensure that the Chicago Park District remains a world-class parks system of which every Chicagoan can be proud.