Army Corporal David B. Milano was among over 55 boxes of remains turned over to US by North Korean leader Kim Jong-un
WLS
By Stacey Baca 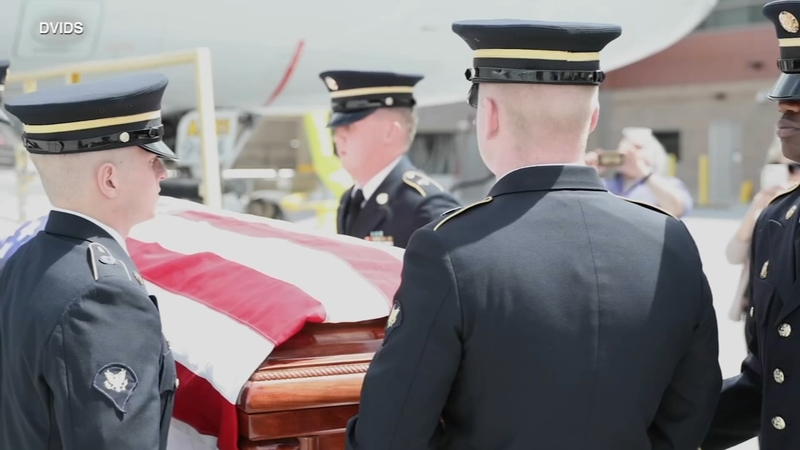 CHICAGO (WLS) -- A Chicago man who was missing in action for nearly 70 years after being killed in the Korean War will be buried this week in Utah.

The remains of Army Corporal David B. Milano were flown to Salt Lake City International Airport Tuesday, where his family stood on the tarmac and watched members of the Utah National Guard conduct an Honorable Carry of his coffin.

It was an emotional moment.

"It was an honor to watch it. I was choked up, you know, very choked up," said Kevin David Jordan, the corporal's nephew. "We all had tears in our eyes."

Milano grew up in Chicago's South Deering neighborhood and attended Catholic schools in the area, relatives said. He joined the Army and was a member of Company D, 1st Battalion, 32nd Infantry Regiment, 7th Infantry Division, when he was reported missing in action on Dec. 2, 1950, according to the Defense POW/MIA Accounting Agency or DPAA.

It took nearly 72 years for his family to be reunited.

"It made me proud to be an American, in that he wasn't forgotten," Kevin David Jordan said. "He sacrificed his life for the United States, but also for South Korea. For those people out there to be free"

The corporal was never forgotten, thanks to his sister Delores Jordan, who raised her children on the Far South Side.

"My mother always had the hope and she always kept him alive, not only with pictures on the wall but the stories she would constantly tell," Kevin David Jordan said.

The return of Corporal Milano's remains began in 2018 when President Donald Trump and North Korean leader Kim Jong-un held a summit. Afterward, North Korea turned over 55 boxes, reportedly containing the remains of American service members killed during the Korean War, according to a DPAA news release. The remains were flown to Hawaii and then transferred to a DPAA lab for identification. Along with anthropological and circumstantial evidence, the DPAA reported that DNA analysis was also conducted, confirming the remains were Milano.

Once confirmed, his relatives were notified.

"It's a good thing I was in an office where I could close the door and absorb it in, and reflect on the emotion that we're getting Uncle David back," said David Jordan, another namesake nephew.

Now, the family is planning his funeral for Friday.

His sister's rosary will be placed in his coffin.

"We're going to place this in Uncle David's coffin with his remains because that's what my mom would have wanted," said Kevin David Jordan, as tears welled in his eyes.

He will be buried next to his sister in Ogden, Utah.