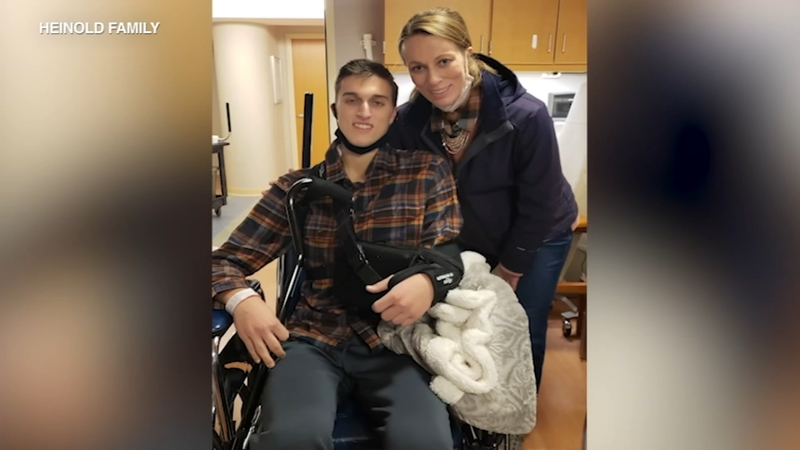 An Indiana mother and son are sharing an incredible bond ahead of Mother's Day after they both underwent the same life-changing surgery.

"I've gotten a lot of my range of motion back," said Daniel Heinold, who has a type of muscular dystrophy called FSH.

He is recovering from shoulder surgery he had in November. By his side during trips to and from Mayo Clinic was his mom, Bobbi. She was uniquely suited to be there for her son because in 1999, Bobbi had the same surgery for the same condition.

"Nobody really understands what I'm going through and what I have to go through still, but she does because she's been through it before so it's really helpful," Daniel said.

"There's something about going through these struggles together that make you a lot closer," Bobbi added.

Twenty years ago, it was Bobbi's mom who was by her side.

"I've relied on my mom a lot these last couple months," she said. "I call her and she says, I know exactly what you're going through."

When she had her surgery, Dr. Joaquin Sanchez-Sotelo was a fellow at Mayo. Now, he is caring for Daniel.

"It's a blessing to have met this family that has a very uncommon problem to know that when I was in training, we helped help the mom and now in my own practice to help her son in the same way, it's just incredibly satisfying and very humbling," Sanchez-Sotelo said.

"It's made a huge difference in my life," Bobbi said. "I dont know that I would have been able to hold my babies without this."

"To be honest, when I talked to Bobbi after the surgery of her son, I was in tears," Sanchez-Sotelo said.

While Daniel is scheduled to have surgery on his other shoulder this summer, this Mother's Day, Bobbi is looking forward to just being together with her family and being grateful for her mom, her care team all those years ago and for the health of all four of her boys.