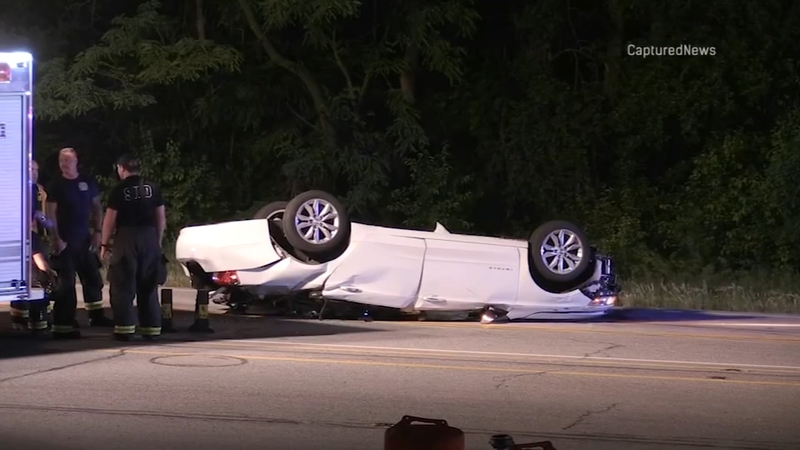 A police patrol car was badly damaged in the chase.

It started in Dyer, and ended two towns over in St. John with one person dead and two people hurt, including an officer.

Dyer police said they were trying to pull over a white Chevy with no license plates about 3:30 a.m. The car was traveling east from Route 30 from the state line.

The driver kept going, ignoring the attempts to pull him over, police said.

The driver continued onto Route 41 into St. John. That's when he rear-ended one car near the 9700-block of Route 41, and then crashed into a Lake County, Indiana police squad, which was there to assist, according to police.

The suspect then flipped the car over, and he was pronounced dead at the scene, police said. He was later identified as Jason Mitchell, 35, of Steger, Lake County Coroner's Office said.

An officer was injured and treated for a broken wrist and shoulder injuries.. The person in the other car that was hit also suffered non-life threatening injuries, police said.

The officer is a 5-year-veteran of the force.

"One of the worst things in the world, for me, is to get a call in the middle of the night advising me that one of our officers has been injured," said Sheriff Oscar Martinez Jr. "The photos clearly illustrate that although this was a terrible crash, it could have been much worse. I thank God that our officer is already starting to recover, and my thoughts and prayers are with her."

The road was closed for several hours, as authorities investigated the scene.