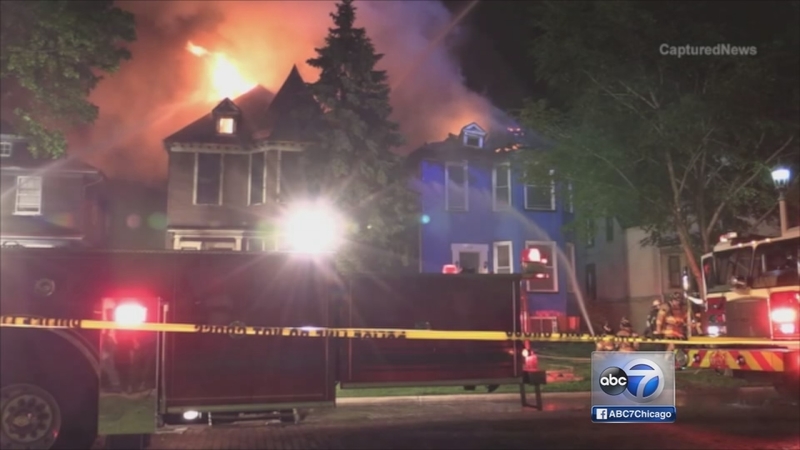 OAK PARK, Ill. (WLS) -- A young boy and a man were rescued from a two-alarm fire that ripped through their home in west suburban Oak Park overnight. Village President Anan Abu-Taleb said they are hospitalized in critical condition.

Abu-Taleb said the boy's sister, who is 12 or 13 years old, was also home when the fire started. He said she is recovering at the hospital on Friday.

The state fire marshal, fire investigators and the K9 unit were at the scene in the 600-block of North Humphrey Avenue for hours Friday morning, looking into what started the fire.

The village president came to the scene to survey the damage.

"I was inside my home when I heard a boom. I ran out the back door and looked at the blue house and the back was totally in flames they were going really high. I don't know what occurred but I assume it was some kind of explosion," said Julius White, who lives down the street.

The back of the apartment building was fully engulfed when firefighters arrived on the scene around 11:30 p.m. Thursday.

"The fire department was running down the street with a man on a stretcher. There were two ambulances there and three women were in tears," said Allan Bernstein, a neighbor.

Police and neighbors tried to rescue a 6-year-old boy and a 54-year-old man from their second-floor unit, but the smoke and flames were too intense. Firefighters wearing oxygen masks were eventually able to get them out.

Both victims were unconscious from breathing in too much smoke. The child was taken to Loyola University Medical Center. The man was taken to West Suburban Hospital.

The fire spread from the apartment building to the structure next door. The roofs of both homes collapsed. Fire officials said both are likely to be a total loss.

"The flames were very impressive. They were shooting off probably as high as the building was, over it," Bernstein said.

About 40 firefighters from nine different departments worked to douse the flames. The fire was extinguished by around 12:30 a.m. Friday.

The Red Cross said a handful of people were left without a place to stay overnight.