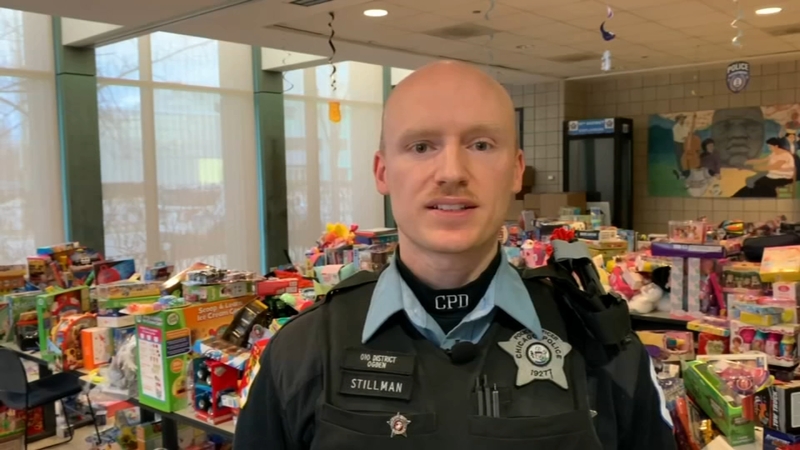 CHICAGO (WLS) -- Shortly after Chicago Police Officer Eric Stillman shot Adam Toledo and rendered aid to the 13-year-old, Stillman is seen on police bodycam video sitting up against the same fence where the incident happened.

The 34-year-old appears distraught and is being comforted by other officers.

"This did not have happen," said Alison Flowers, Invisible Institute Director of Investigations. "This was completely avoidable and Officer Stillman is a product of his training, whether we like it or not."
RELATED | Bodycam video of teen killed by Chicago police released by COPA

The Invisible Institute, an investigative organization that tracks police misconduct, said Stillman has three misconduct complaints since he became a Chicago police officer in 2015. Two involve improper search. None resulted in disciplinary action.

Officer Eric Stillman, 34, has three misconduct complaints since he became a Chicago police officer in 2015, according to the Invisible Institute.

"The majority of Chicago police officers have three or four complaints over the course of their entire careers, but Officer Stillman has amassed that amount in a very short period of time," Flowers said.

However, Flowers said there are no use of force reports to indicate Stillman had fired his weapon before.

Stillman's attorney, Tim Grace, said his client is devastated over the shooting. Stillman has spent his career at the 10 District in North Lawndale.

"And this is the hardest part, these officers need to make split second decisions of life and death," Grace said during an appearance on Fox News Friday night. "And he made a decision that was consistent with the Chicago Police general use of force guidelines and with the law."

Stillman's attorney said the officer was well liked at the 10th District and was known as "one of the good guys."

Before becoming a police officer, Stillman joined the U.S. Marines. His service included a deployment to Afghanistan.

Stillman remains in the Marine Reserves. In a lengthy statement released Friday by his attorney Tim Grace defending the shooting, Grace writes: "The officer had no place to take cover or concealment, the gun was being orientate in his direction and he was left with no other option."

Stillman has been placed on administrative duty until the investigation is complete.

There is irrefutable evidence that the adult offender and juvenile offender were standing on the corner of 22nd and Sawyer. One was flashing gang signs and the other was firing a semiautomatic handgun at a passing car.

There is irrefutable evidence that the shell casings recovered from that location match the handgun that was in the hands of the juvenile when he was tragically shot by the officer.

There is irrefutable evidence that the shot spotter alerted the Chicago Police to those shots (in excess of 8) and the officers responded within a minute.

There is irrefutable evidence that when the officers arrived on scene the two offenders were the only persons in the vicinity of the shot spotter location and the officers had reasonable suspicion to conduct a street stop to further the investigation. It was their duty to investigate.

The two offenders were located and began to flee and then the adult stopped and the juvenile offender continued to flee holding his side.

The officer gave multiple verbal commands to the fleeing juvenile offender including, announcing his office as CPD, ordering him to stop and telling him "don't do it"

At this point the officer was faced with a life threatening and deadly force situation. All prior attempts to deescalate and gain compliance with all of the officers lawful orders had failed.

The officer had no place to take cover or concealment, the gun was being orientate in his direction and he was left with no other option.

A police officer is trained and it is ingrained in them from the moment they enter the Chicago Police Academy that deadly force is a last resort and is only justified when the officer is confronted with an imminent threat of death or great bodily harm to himself or herself or another person. They do not take this lightly. They have no duty to retreat, they have a duty to stop the threat and save lives.

The Cook County State's Attorney in its bond proffer involving the charging of the adult correctly and accurately described the events. They professionally gave an excellent non bias description of what occurred. Now the Cook County States Attorney should do its job and duty and charge the adult with felony murder.

The media's rush to judgement is disrespectful to all Chicago Police Officers who proudly wear the badge and who, at risk to their own personal peril, keep our City safe. A responsible media should not fan the flames in our community but rather should honestly and objectively inform the citizenry of the facts. Bias reporting does nothing to heal the distrust and stop the gun violence.

The juvenile offender had a freshly inked Latin King gang tattoo and 22nd and Sawyer is the heart of Latin King territory. This street gang causes unbelievable danger to the law abiding Chicagoans who live, work and raise their families in this community. It is a tragedy that a young person is stolen from his family by a street gang in Chicago. Mayor Lightfoot correctly stated she wanted to get the person who gave Mr. Toledo the gun. Fortunately, we know who that person is, and he should be prosecuted to the fullest extent of the law.

What is amazing and disheartening is that very few have asked about the welfare of the officer. Specifically there is very little interest in the wellbeing of the officer and the impact experienced by the officer who was required to use deadly force in the line of duty. The officer involved has served his country and his city with honor and deserves our support.