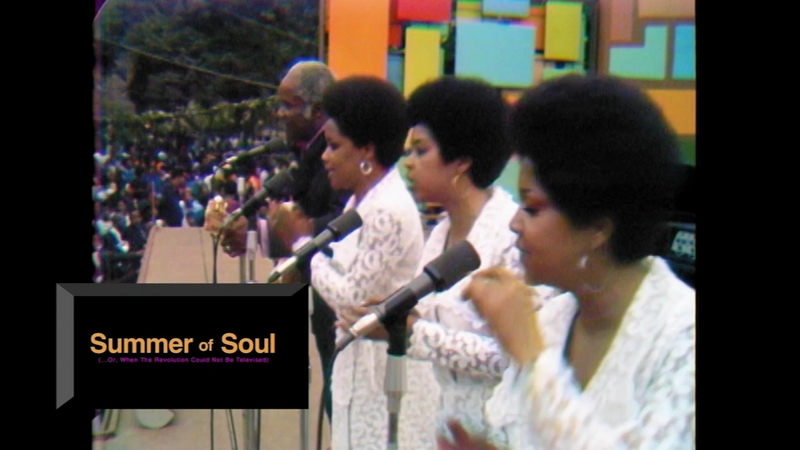 'Summer of Soul' is historic celebration of Black music, culture

CHICAGO (WLS) -- "Summer Of Soul," a historic celebration of Black music and culture, is the front runner to win an Academy Award for Best Documentary.

In 1969, the Harlem Cultural Festival was held against the backdrop of civil unrest and seismic changes in every realm of society. It took over 50 years to get the nearly forgotten video of this landmark event restored and seen. Now, it's already earned major awards, and is likely on the way to an Oscar.

Storytellers Spotlight: Questlove calls Oscar-nominee 'Summer of Soul' a film that his younger self would have wanted to see
EMBED More News Videos

Questlove told On The Red Carpet that the heart behind his Oscar-nominated "Summer of Soul" came from a desire to create content that his younger self would want to see.

Ahmir "Questlove" Thompson is a first-time director who was joined by Joseph Patel as producer.

"To be in a room full of incredible filmmakers, actors, they're like, 'Oh My God, I love that movie, I've seen it five times,'" Patel said, "and this is like the elite craftsmen in the world of film telling you this, and it's just an unreal feeling."

Patel shared why he thinks the footage was buried for so long.

"I don't think we should sugar coat it," he said, "People didn't view Black stories or a Black event is on par with something like Woodstock."

Patel added, "When we show the footage to Marilyn McCoo and Billy Davis Jr. and they get really teary about what it meant to them to perform in Harlem, that a lot of people thought they were a white group... One of the things Amir as a director understands, as a musician and director is that, he talked to them about code switching, you perform one way before audiences at the Copa, and you perform a different way before audiences of your own people."
Crucial interviews were done during the worst of the pandemic. Patel took extreme measures to reach Mavis Staples here in Chicago.

"We had a sound guy in Chicago go to her place in a HAZMAT suit, and drop a disinfected mic on her door," he said.

He hopes audiences take away an important message after watching.

"This is not just about music and political events, it's about emotion and memory and reclaiming history," Patel said.

Mark your calendar: March 27 is Oscar Sunday. Special "On The Red Carpet" coverage begins at 1 p.m. ET/10 a.m. PT and continues all day leading up to the 94th Academy Awards ceremony. After the last award is handed out, stay with "On The Red Carpet" for continuing coverage. Be sure to follow @OnTheRedCarpet on Facebook, Twitter, Instagram and TikTok for all your Oscar news and information. Click here to download our CTV apps to watch "On The Red Carpet" wherever you stream.