Passengers kicked off airline due to weight limit 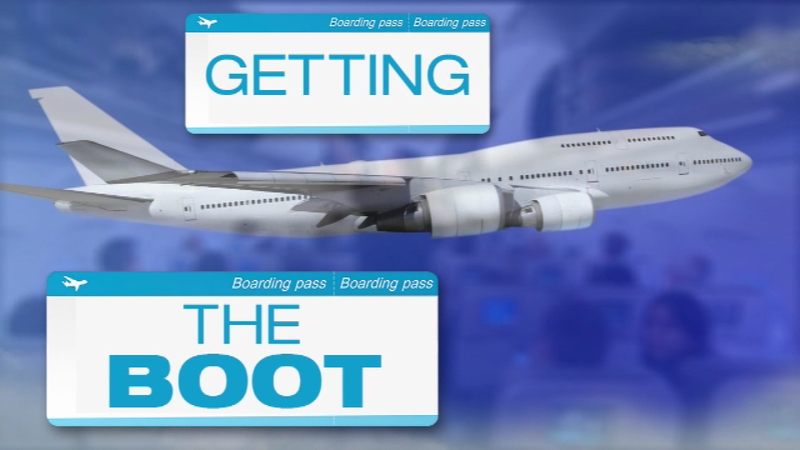 Passengers kicked off airline due to weight limit

CHICAGO (WLS) -- The ABC7 I-Team is investigating the case of a 175-pound man who was forcibly removed from a plane.

Experts say it happens more than you may think - people of all sizes being told they can't go on the flight because there is too much weight on-board.

The I-Team responded to one passenger's concerns because a flight attendant told him he was getting the boot after he was boarded and buckled in!

"I was in shock, I didn't sleep that night, I was kinda numb all first day or two," said Dan Nykaza, a Wilmette Dentist.

Nykaza says he was blind-sided when he got forcibly bumped off his American Airlines "Envoy" regional carrier flight from O'Hare to Salt Lake City.

"So I missed the entire weekend. My nephew was there, my daughter, it was sad," Nykaza said.

Nykaza, who has "platinum status," says he was so angry he walked away and turned down a $200 voucher. The flight wasn't oversold.

"And I'm like 'Why?' Because there was too much weight on the plane and nobody would take the voucher they were offering. So they chose two people, me being one of them," Nykaza said.

Nykaza says he and the other passenger were told they were the last to check in, so they were out.

"I don't think so, there was probably a total of 300 pounds taken off the plane between me and the other gentleman who was a little smaller than me," Nykaza said.

But the I-Team found out that it can happen to anyone when flying on any airline on any size plane. Especially in cases where the flight may take longer than expected and the plane needs extra fuel.

"Every airplane has maximum takeoff weight - they can't take off if they are any heavier than that," said Brian Sumers, an airline expert.

Sumers says airlines have different policies as to who goes. If no one takes a voluntary voucher, they try to disrupt as few people as possible.

"Most airlines remove people there is a pretty simple reason for it - you have to remember you may have to take 10 bags off of a flight and then there will be 10 people will get to a destination and realize they don't have laptops or medicine or whatever and you will annoy 10 people at the last minute," Sumers said.

He says passengers should book early, check in early and make sure you have an assigned seat well before check-in.

Doing that can keep you off the bump list.

Nykaza wasn't happy with how American handled his situation and he sent an email.

"I haven't heard anything and it's been a week," he said.

So the I-Team contacted American Airlines.

Its spokesperson refused an on-camera interview but said the airline issued an apology.

The spokesperson says under a federal passenger rights law, Nykaza should have been offered more than a $200 voucher when he was forced to de-plane.

American Airlines also says that its regional carrier, "Envoy," did not follow proper policy on the flight and should have removed the people who booked last.

Instead, Envoy flight attendants were following its parent company's policy by removing the last "checked- in" passengers, like Nykaza.

If you're bumped from a flight, you may have legal rights.

Airline experts say that passenger right's law protects consumers who are involuntarily bumped, due to weight restrictions or oversold flights.

To see if you qualify for a payout, visit: http://airconsumer.ost.dot.gov/publications/flyrights.htm