Family gets remains of Illinois veteran who died at Pearl Harbor 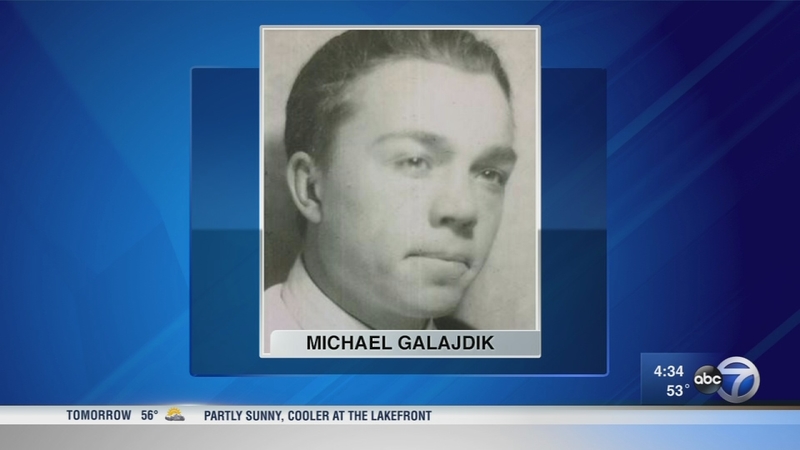 Family gets remains of Illinois veteran who died at Pearl Harbor

CHICAGO (WLS) -- Fireman First Class Michael Galajdik finally came home Friday more than 75 years after his death and the Navy veteran from Joliet will be able to rest in peace.

A flight at O'Hare Airport landed Friday afternoon that carried the remains of the Illinois veteran who died in the attack on Pearl Harbor.

Galajdik was on the U.S.S. Oklahoma in December 1941 when Japan attacked Pearl Harbor killing more than 2,300 Americans.

The Navy veteran grew up in Lockport Township and was one of the hundreds of servicemen recovered but never positively identified, until now, because of improvements with DNA technology.

"It brought closure to the family. I'm glad I was able to fulfill my ma's wish," George Sternisha, Galajdik's nephew, said.

The southwest suburban resident escorted his uncle's body from Hawaii to O'Hare airport on Friday.

The remains of the Firemen First Class arrived to full military honors from the Navy and the Chicago Fire Department.

Maryann Sternisha said her husband, George who is Galajdik's nephew, was notified by the military about the positive identification.
Sternisha and his now deceased sister -- had been hoping to fulfill their promise they made to their mother in 2003 -- to bring Galajdik home.

"It's been something that my husband has wanted to do for years and years to bring closure and to fulfil a wish that his mother had of bringing him home, which she never was able to do," Sternisha said.

After arriving to full military honors, the remains of Galajdik was escorted by the Illinois Patriot Guard and Warriors Watch.

"Sadly there was no family left that knew him, but just like them we will honor and respect and give him his due," Dave Gier, Illinois Patriot Guard, said.