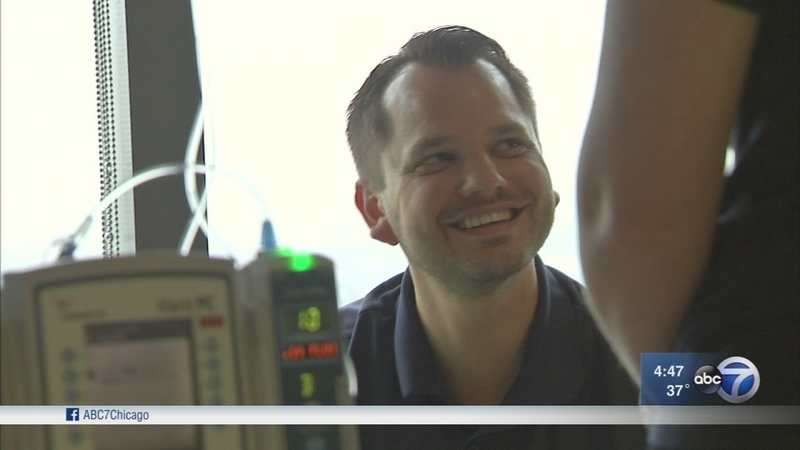 CHICAGO (WLS) -- A two-time cancer survivor has dedicated his life to visiting cancer patients and sending them letters, cards, and care packages.

Every month, Phil Zielke and his organization, Phil's Friends, send out thousands of bags and letters to hospitals to encourage people to keep fighting.

"I was diagnosed with Stage 4B Hodgkin's Lymphoma back in 2004 and I had all the symptoms of the most advance stage of the disease for about 9 months at that time," said Zielke. "I would end up doing 6 months of chemotherapy and so I went in and at the end of 6 months the doctors said I was cancer free."

But Zielke was rediagnosed with cancer in 2005.

"Went through about a year of treatment the second time," said Zielke. "I did chemotherapy and stem cell transplants and radiation and it was really during those times when I saw a huge need."

So in November 2006, Zielke created Phil's Friends, where volunteers from across Chicagoland write letters and creating care packages to send to those in need, creating a support system to help those going through treatment.

"The impact is lasting. It's not just the care package that they get and a one-time visit, it's an opportunity for them to gain support through the trajectory of their illness which is sometimes a long time," said Sarah Anderson, and oncology nurse at Rush Medical.

For many patients, the cards and packages are thoughtful, but it's meeting Phil himself that has the greatest impact.

"I was very encouraged by Phil's story because he himself is a two-time cancer survivor and he was there before and he can understand the pain and the feeling. It's very encouraging to see him now doing very well," said Hui, a patient.

"I basically made a promise in my hospital bed and said if I'm going to get through this I am going to dedicate my life to helping other people," said Zielke.

Letters and packages are mailed to all 50 states, but Phil said he wants build Hope Centers in major areas around the country, and Hope Centers inside hospitals so volunteers have central locations to work.