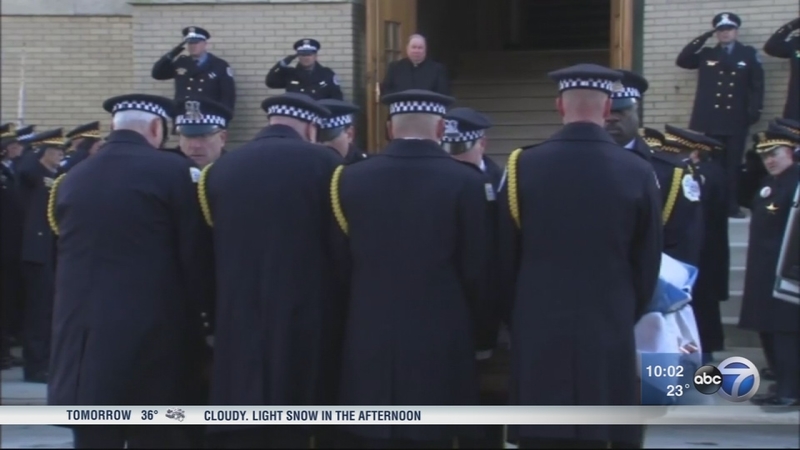 On the day Bauer would have celebrated his 16th wedding anniversary a visitation was held for the fallen commander.

Bauer, who led the 18th Police District, was shot and killed on Tuesday afternoon in a stairwell outside the Thompson Center.

"The healing process starts today for CPD as well as the family. This is going to be a difficult two days, but we can get through it," said Superintendent Eddie Johnson.

His casket was met by a large contingent of Chicago police, including the command staff and members from his unit of assignment. Those members received the casket, following tradition.

"I think it speaks for itself. He was just an amazing person, and this is a testament to his effect on society," said Amit Joshi, who attended the visitation.

The wait to enter the church approached three hours, and the line wrapped around one block, then another, and then another.

Bauer's wife Erin and 13-year-old daughter Grace climbed the church steps and greeted every member of the public inside.

"The grief has got to be deep, it's just a difficult time for them. So we just offer our prayers and our support in any way," said Pastor Joseph Altman, Nativity of Our Lord Parish.

"He was just a fun guy. He was honest. He was real. He was just a real guy, nothing pretentious about him. What you saw is what you got," said Susan Hagemann, cousin of Bauer's wife.

"All this went so fast. All this right now is just too much for any of us in the neighborhood to understand," said Bridgeport resident Luis Guido.

"Not only did we lose a leader, a gentleman who not only took on the job but took on the responsibilities that goes with it, but a dear friend of mine. I attended many meetings with him. I live four blocks away from the 18th District station," said Illinois Secretary of State Jesse White.

Chicago firefighters hoisted a flag, and officers from departments all over the city arrived to pay their respects and support the family. Johnson and Mayor Rahm Emanuel were also in attendance.

"I just have a profound amount of respect for the sacrifice that he made for our city. I did not know him personally but my heart goes out to his family and all his friends and colleagues," said Bridgeport resident Linda Ryan.

Bauer worshipped at Nativity of Our Lord Church with his family, and was a fixture in the Bridgeport neighborhood.

"It's time for the community to come together and basically say, you're with us, you're in our hearts, we're going to remember you," said former alderman James Balcer.

The Chicago Department of Aviation (CDA) joins the City of Chicago in honoring a fallen hero - Chicago Police Department Commander Paul Bauer - with flags at half-staff and blue lighting in the terminals and City Operations Towers. pic.twitter.com/8oJ3o5y1ck

Even those who never met the commander felt moved and shared in the family's grief.

Maryjo Viero tied dozens of blue ribbons along the route of the funeral procession.

"It's hard to put into words. My heart breaks, for everybody that goes out and risks their lives. For every first responder. But for his family today, tomorrow, and all the days to come," she said.

Both of Viero's sisters are police officers, and she knows the risks they have to take. She said that's why preparing the processional is so important to her.

"I hope it's lined with our entire community. And I hope that everyone in the procession can feel the love and support that we have for them," Viero said.

In Mount Greenwood, a neighborhood with deep ties to the men and women behind the badge, it's a sea of blue ribbons along the procession route.

"I really feel sorry for them, and I just want to show them my support," said Mary Kopala, resident.

"I mean tragic. He was one of the good guys. I mean he had a long service career. He was definitely someone who dedicated his life to serving us," said Bridgeport resident Matthew Cruz.

Alderman Matt O'Shea is calling on the community to line the streets Saturday to pay their respects to the fallen commander.

"I could only hope that the Bauer family and the entire Chicago Police Department knows just how much this city appreciates his service," O'Shea said.

Since the shooting, people have come to his Near North police district to sign a condolence book.

In the South Loop, students and staff left messages for the Bauer family, especially Grace, a 7th grader at the school.

"They have been writing messages to Grace every day since yesterday and the messages have been absolutely beautiful and I think its great way for them to deal with it also," said South Loop Elementary Principal Tara Shelton.

Meanwhile the murder suspect 44 year old Shomari Legghette has been charged with first degree murder of a police officer. Prosecutors said he shot commander Bauer six times. Bauer was assisting officers who were trying to make a street stop on Legghette.

The funeral for Commander Bauer will start at 10 a.m. Saturday and will be limited to law enforcement officers, family, friends and dignitaries. The funeral will be livestreamed on ABC7Chicago.com.

Due to the services, the Chicago Office of Emergency Management and Communications is putting temporary parking restrictions into effect. They are currently in place as of Thursday night and will last until Saturday at 4 p.m. for the 3600-3900 blocks of South Halsted, South Emerald, South Union, South Lowe and South Wallace streets.

Residents should read signage in the area before parking. Cars may be relocated due to the restrictions.