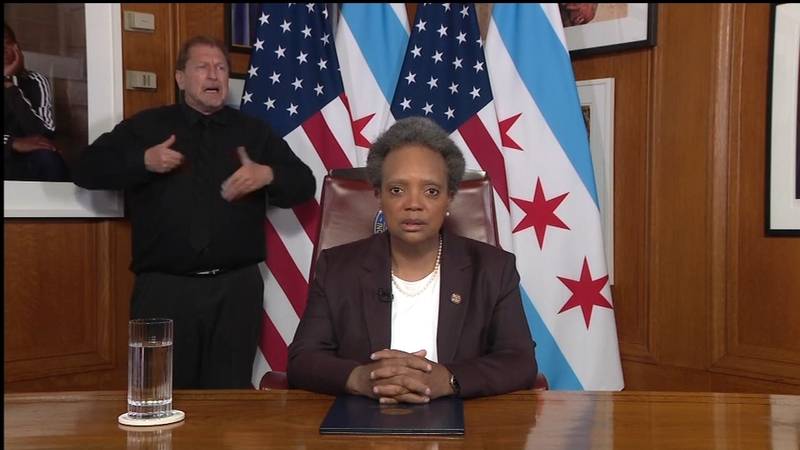 Mayor Lightfoot calls for unity in wake of unrest

CHICAGO (WLS) -- In a special address Tuesday evening, Chicago Mayor Lori Lightfoot called for unity in the wake of the unrest that rocked the city after George Floyd's death.

The mayor also announced she has given orders to the police superintendent to implement new reforms to enhance community policing she wants set in place in the next 90 days.

"Over the last few days, like many of you I have experienced a series of difficult emotions, anger, frustration, despair," said Lightfoot.

Lightfoot reflected on the the murder of George Floyd and how the impact has reverberated across the country.

Chicago Mayor Lori Lightfoot gave a State of the City address on June 2, 2020.

She also talked about the destructive impact of institutional racism.


"For black Americans, our history is paved with the racism and violence of the original sin of slavery," said Lightoot.

The mayor said police reforms under Chicago's consent decree are moving too slowly, so she has directed police Superintendent David Brown to accelerate reforms and also implement new training and accountability measures.

Her plans include having community members be teachers at the police academy, youth led tours of neighborhoods for officers, as well as what she called a real wellness program for officers in crisis.
"Because we all know that hurt people hurt people," she said.

The mayor also had a message for young people.


"I want you to know that we see you and hear you. I've heard that you are concerned and hurt and angry and traumatized as well as we all are," said Lightfoot.

She emphasized that the city supports peaceful demonstrations but will not tolerate the chaos that has torn about neighborhoods over the past few days.

"I must draw a sharp line between the righteous and the wrong between the hopeful and the cynical. We cannot conflate legitimate first amendment expression with criminal conduct," Lightfoot said.