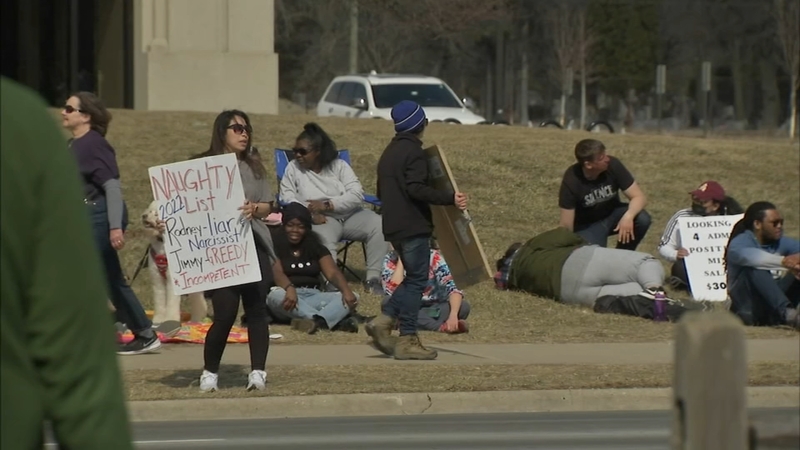 MAYWOOD, Ill. (WLS) -- Teachers were back on the picket line Wednesday morning after a heated board meeting in Proviso Township High School District 209 Tuesday night.

The school board and its president, Rodney Alexander, were booed and heckled, after teachers have been on strike for more than a week.

Students have missed eight days of school, and, after Tuesday night's meeting, it seems there's no end in sight.

The board did not take any questions, but held public comment, which lasted for more than two hours.

People shouted, chanted and booed the board as a teachers' strike in the west suburban district stretches on.

Board members criticized district superintendent James Henderson, who appeared to lose his temper at the meeting last night.

"Our students are out of school, our teachers deserve a better contract and he's not doing everything in his power to get kids back in our school," said board member Claudia Medina. "The superintendent confronted me with violence when I asked for his calendar. It is a violation of his contract, it is a violation of school policy, and I am calling on other school board members to get him to resign or to fire him."

The district said it has increased its salary proposal offer from 7% over three years to 9%, but said the teachers at Proviso East in Maywood, Proviso West in Hillside and Proviso Math and Science Academy in Forest Park are demanding a 12.75% increase.

Class size for 4,200 students is also a bone of content as, it appears, is respect.

"We have to work for four years to prove ourselves to tenured, and you don't even wanna give us three years and 1.25% that's not a lot," said Angda Goel, English teacher.

"Knowing that the superintendent and the president of the Board of Education should be role models for our students, I just want to say what I saw was the complete opposite," said student Jake Voegtle.

Medina said the administration is paying administrators inflated salaries out of Title I funds intended for student instruction.

"Twenty percent of the staff leaves every year. That is turnover that hurts our district, hurts these kids. We are here for the kids," said history teacher Steve Rauch.

"I call for Superintendent Henderson to resign from his position so we can have somebody who actually listens to the students listens to the teachers," said senior Jose Carbajal.