In a sit-down interview, Mayor Emanuel reflects on his big decision, his successor and what's next 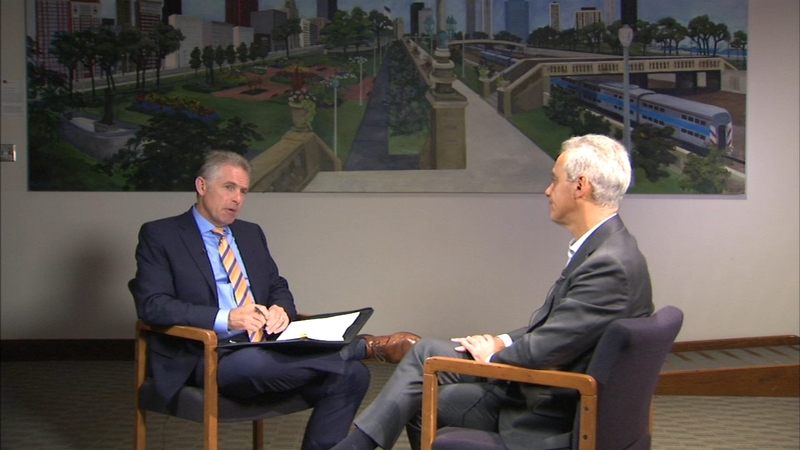 VIDEO: Mayor Rahm Emanuel talked to ABC7 a day after announcing he would not run for mayor again

CHICAGO (WLS) -- As the now-outgoing mayor of the city of Big Shoulders, Rahm Emanuel had a big weight off his own shoulders Wednesday morning.

"I'm a free man," joked Emanuel as he walked into a room for his one-on-one interview with ABC7.

A day after announcing that he would not seek re-election to his third term, Emanuel talked to ABC7 in a one-on-one interview about his decision, family and the race to replace him.

His daughter, Alana, who is college, called Wednesday morning on her way to class.

Emanuel said he feels liberated by his decision.

So when did he first consider not running for re-election?

"That's a good question," Emanuel said. "This was like a summer discussion, Amy and I would steal away like when we, Amy and I went to see John McCain, we were in Arizona overnight in June and so we talked about it there. We have a cottage in Michigan we would walk along the beach or, we have a fire pit, would stay up at night."

Emanuel said he consulted with is children and former Presidents Barack Obama and Bill Clinton before making his final decision Monday night.

He said he did not have concerns that he might lose the election.

"So let me answer this way I've never lost, nobody's ever, I run six times my name was on the ballot, never lost," Emanuel said. "That said and somewhat to be honest with you Craig it was somewhat liberating because I was confident that we were executing the type of campaign to secure that victory and it gave me the freedom to make a choice which was right for me and Amy."

Emanuel said the next mayor could be in the current pool, but more candidates will certainly join the race.

In fact, Emanuel said he doesn't plan to support any candidates in the race to replace him - now or later.

"This is a big job and the voters over the next six months are going to take a measure of all the people and see if they are big enough to fill the shoes, you can't be a one trick pony," the Mayor said.

When asked about running for president, Emanuel got rather animated.

"Not a chance, you think, you think, I don't even understand this question. So let me say this, I've spent eight years there in the White House, honored to have worked and had the confidence of both President Obama and President Clinton. I don't think Amy's idea of being empty-nesters was me spending my time in Iowa, we have other versions of what we're going to do with our time. No, I have no interest in that," Emanuel said.

But Emanuel made it clear he will still play a public roll at some point after leaving office in May. He said he'll be talking about some ideas soon.

As for his campaign war chest, Emanuel said he plans to return it to the donors.

"Look, I'm going to give it back," he said. "It's not my money. ... The people that contributed from organized labor to business community to entrepreneurs, it's their resources and I'll send it right back to them."

RELATED: Pot at the end of Rahm's rainbow filled with cash

Among his reasons for not running again was not the trial of Chicago police Officer Jason Van Dyke, which starts this month. Emanuel said it had nothing to do with his decision.

However, he adds that the city's violence took the greatest toll on him in his seven and a half years in office.

After the mayor's announcement, a group of faith leaders gathered with Rev. Jesse Jackson calling on anyone who might want to join the race for mayor now to put forth an urban agenda. There are at least 12 candidates who have said they want to take over as mayor, and several rumored to be interested.

Election Day is February 26, 2019. Candidates can start filing their paperwork on Nov. 19.