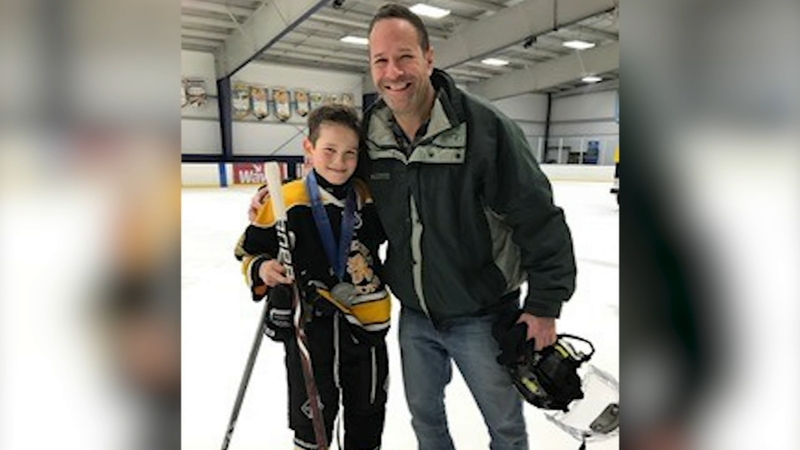 CHICAGO (WLS) -- Rich Cohen is a bestselling author who has written about The Rolling Stones, The Bears, The Cubs and more!

He was just 3 years old, growing up on Chicago's North Shore when he got hooked on hockey, which was the inspiration for his new book "Pee Wees: Confessions of a Hockey Parent."

"If you ask my kid what's the best thing about hockey, he'd say the Holiday Inn breakfast buffet," Cohen said. "That's what they remember, and that's what they love they love tournaments -they love hanging out with their friends. They love staying in a hotel."

Cohen and wife Jessica have four sons, but Micah is the one he finally got on the ice for serious playtime.

"Once you get in there and see your kid playing, it's like it's you," Cohen said. "It's so intense and you as know as you're doing it, you know, you're caring too much. Are you actually banging on the glass now?"

"I can relate - hockey is my lifelong passion, as a player and fan," said ABC7 reporter Ravi Baichwal. "Now, my 15-year-old daughter, Gabriella, is a standout on her varsity team!"

"It's such a rush when your kid does something well, you know this, when your kid scores a goal -- it's so exciting, you're taken by surprise," Cohen said. "It's so intense that when it happens, you want it to happen again and then you're chasing the kind of feeling and you get a little crazy."

However, Cohen's dad, Herb, had no interest in the ice.

"I was at the Deerfield bubble, laid out after a big hit and I heard him yell, 'get up, you're not hurt,' that was the extent of his coaching for me," Cohen recalled. "I'm somebody who waited all my life for the Cubs to win and the Bears to win, this is more than that, it's like your kid is the Cubs and the Bears."

Young Micah, once taken out of the action, slayed his dad with wisdom.

"Why aren't you mad that they moved you and he said, 'I don't care where they play me, it's still hockey,' and oh my God, he's right. I feel like a complete idiot," Cohen said. "So many hockey parents -- and I'm one of them -- are focusing on where our kid's gonna be next year. What team they're gonna make, how far they're gonna go, and we're kind of missing their hockey career, for most them. This is their NHL. When it works, and when they're a team and the team gels, you just start giggling it's the most magical thing in the world."
Report a correction or typo
Related topics:
sportschicagodeerfieldhockeyparentingbooks
Copyright © 2021 WLS-TV. All Rights Reserved.
HOCKEY
Blackhawks scandal: NHL veteran speaks out in support of Kyle Beach
Quenneville resigns from Panthers in wake of Blackhawks scandal
'Coach Q' retires from Panthers in wake of Blackhawks scandal
Chicago law firm involved in Blackhawks, movie shooting probes
TOP STORIES
Fashion designer Virgil Abloh dies at 41
Vaccine inequity, hesitancy made omicron more likely: Scientists
Vigil for Waukesha parade victims; 8 kids still in hospital | LIVE
Jussie Smollett trial set to begin with jury selection Monday
Cyber Monday 2021 deals shopping guide
Canada among latest countries reporting cases of omicron variant
Who is the real Ghislaine Maxwell: Epstein enabler or pawn?
Show More
Giants set to honor Michael Strahan with jersey retirement
Supreme Court set to take up all-or-nothing abortion fight
40 shot, 3 fatally, in Chicago Thanksgiving weekend violence: CPD
Rare mammoth tusk found at bottom of ocean off CA coast
2 shot while in car in River North: CPD
More TOP STORIES News