'Get out of the building!': Rockdale fire at trucking company captured on police bodycam video 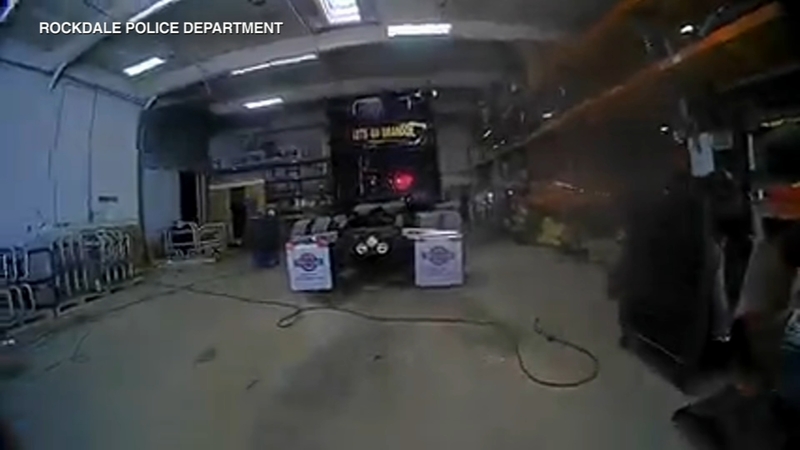 Thick smoke can be seen and loud "booms" can be heard in the background.

There was also a rush to get people to safety.

"Get out of the building! Go!" one officer yelled.

A fire at a Rockdale trucking company was captured on police bodycam.

Longhorn Trucking owns the property where the fire took place..

The large blaze engulfed a warehouse and a number of semi trucks parked around the buildings. Emergency crews worked to contain it for more than an hour.

Chopper 7HD was over the scene of a large fire in southwest suburban Rockdale Friday afternoon.

The Manhattan Fire District, which responded to assist with fighting the fire, said it happened at a truck repair shop. There were no reports of any injuries.

Thick black smoke billowed from the building and trucks as fire crews sprayed water from firetrucks. The smoke was so thick and abundant, it was visible on ABC7's Doppler 7MAX radar.

ABC7 meteorologist Larry Mowry shows how Doppler 7 MAX radar picked up the smoke from a fire in Rockdale Friday afternoon.

The fire appeared to be largely contained and extinguished shortly after 5:30 p.m., though firefighters remained on scene fighting hotspots.

The cause of the blaze was still unknown Wednesday.

Rockdale is southwest of Chicago, near Joliet.