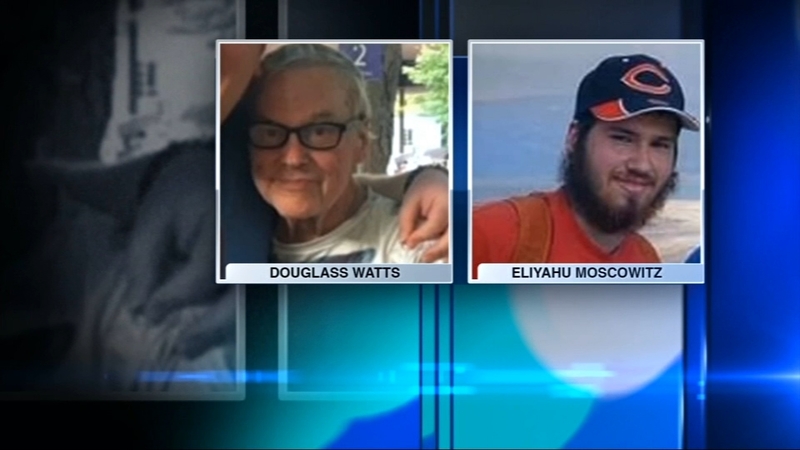 CHICAGO (WLS) -- The man believed to be responsible for killing two men in a 36-hour period in Rogers Park remains on the loose and neighbors remain on guard.

"People think about what they really have to do, whether it is errands or dog walks. People are trying to be a little more efficient," said Larry Fox, Rogers Park resident.

Douglass Watts, 73, was gunned down on a sidewalk in the 1400-block of West Sherwin last Sunday morning. Just a day later, 24-year-old Eliyahu Moscowitz was also shot in the head and left for dead on the pedestrian path in Loyola Park.

The community came together to remember the life of Moscowitz at Congregation B'nei Ruven Thursday evening. The room was packed and multiple people spoke up about how wonderful he was, including his father who said through these heartbreaking moments he's heard endless stories of the wonderful person his son was.

"We were deluged with stories from friends and coworkers," said Rabbi Mendel Moscowitz, father.

Though the Rogers Park community is on edge following the shootings, from the tragedy comes community support.

"Even if it's a terrible situation, it is bringing us together," said Tony Lonien, owner of the bar Poitinstil.

"When you have darkness, a little extra light counters a lot of darkness," said Rabbi Baruch Hertz, spoke at memorial.

The man believed to be responsible for killing two men in a 36-hour period in Rogers Park remains on the run and neighbors remain on guard.

With some people changing their routines, businesses are taking a hit.

"In the evenings we are definitely not as busy as we normally are," said Heather Wilson, owner of Rogers Bark Pet Salon.

"We are a really strong community so I think we will make it pass this. But it will feel a lot better once the suspect is in custody," he said.

Alderman Joe Moore is advising residents to take precautions but he doesn't want them to be afraid to venture out.

"It's possible that he may not strike again but it's also possible he may strike again so we shouldn't let our guard down," he said.

Moore worked out an agreement with rideshare company Lyft for a coupon for residents for two discounted rides within Rogers Park. The coupon is available at the 49th Ward office.

"It's going to be in place until the end of October or when they catch the perpetrator, whichever happens first," he said.

Lyft released a statement about the discounted rides, saying: "We are proud to provide reliable transportation across Chicago and to help solve transportation challenges. Alderman Moore approached us, interested in ensuring his constituents had access to safe and affordable transportation. As always, we're eager to support Chicagoans and get them where they need to go."