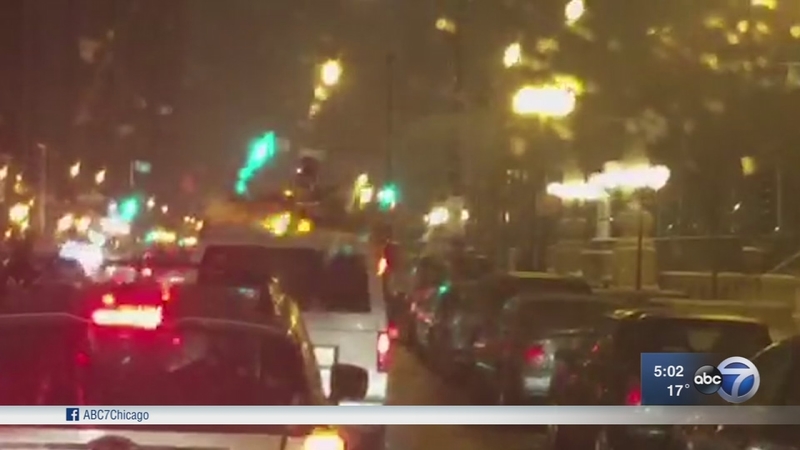 CHICAGO (WLS) -- In a video that you'll only see on Eyewitness News, city crews were caught throwing shovels full of salt on parked cars in Chicago.

Keeping the streets and sidewalks clear of snow is one of the city's top priorities, but in the rush to lay down salt on North Wacker Drive during Sunday's storm, ABC 7 reporter Michelle Gallardo caught a city crew doing something no person who parks downtown wants to see: a worker shoveling salt from a moving vehicle over the tops of parked cars. The result? A lot of that salt ended up on people's vehicles rather than the sidewalk.

"I really hope that's not how they do it. Maybe they were just trying to get it done quickly, but that should not be the normal way to shovel snow on the sidewalk. i don't shovel it that way," driver Charlet Dupar said.

The Chicago Department of Transportation is responsible for clearing North Wacker Drive, the city's bridges and bike lanes.

When asked about the cell phone video, a CDOT spokesperson said: "This is not standard operating procedure. It was an isolated incident. The crew had to improvise because there was a breakdown in the equipment that is usually used to spread salt on Wacker drive's sidewalk. It has been discussed with the crew that this was not a good solution."

It's long been known that salt can be highly corrosive to the undercarriage of vehicles. It can also dull the paint - or even wear away at it - depending on the model.

"In the past, years ago, cars would rust very easily. Salt would have a lot to do with it, the coatings they have on the cars now, minimal, very minimal," said Marco Malone, Erie-LaSalle Body Shop.