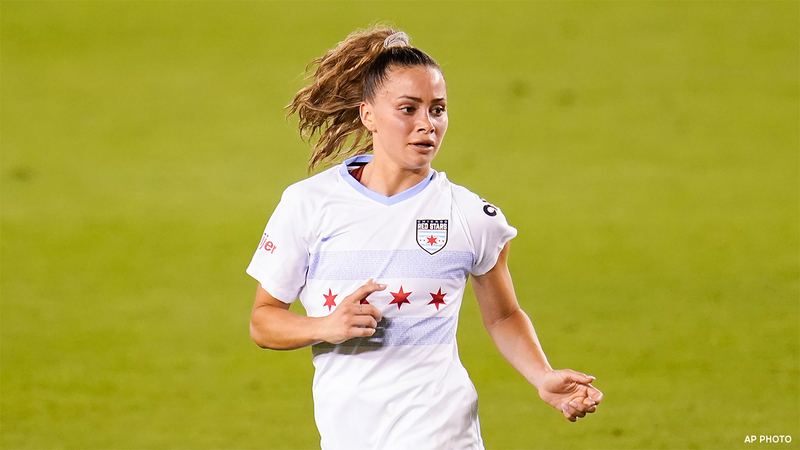 Soccer player says she was racially profiled after Dash match

HOUSTON -- The National Women's Soccer League has opened a formal investigation after Chicago Red Stars defender Sarah Gorden said she and her boyfriend were racially profiled after a match with the Houston Dash on Friday.

The alleged incident happened after the opening match of the league's Challenge Cup tournament.

In a thread on Twitter the next morning, Gorden explained that her boyfriend was heading to talk to her when "we were immediately (before he was close 2 me) followed by security and told he would be arrested if he came close. Meanwhile white players were talking to white fam all over the stadium."

"At first I didn't realize this was a racial issue until I saw white @HoustonDash players surrounding the stadium talking closely to their family and we were the only ones targeted," she continued. "I asked the security guard why he was only talking to us. He said he would go to them later. He never approached any of them. These players have multiple photos with their people."

"This is just another reason why we kneel," the thread concluded.

My bf came to our game against @HoustonDash + after the game he came down steps to talk to me. We were immediately (before he was close 2 me)followed by security and told he would be arrested if he came close. Meanwhile white players were talking to white fam all over the stadium

I asked the security guard why he was only talking to us. He said he would go to them later. He never approached any of them. These players have multiple photos with their people.

This is just another reason why we kneel.

Red Stars assistant coach Scott Parkinson backed up Gorden's experience, sharing an explanation on Twitter of what he said he saw after someone alerted him about the situation.

"I decided to go see what was happening. As I made my way to the situation, I noticed that there were other players with other fans/family, just as Sarah was," Parkinson said. "It seemed to me that Sarah and her three Black friends were the only ones being addressed in this way and it was extremely upsetting. I was angry and gave the staff member a piece of my mind. I told him to leave them alone and to deal with everyone else the same way. He was arrogant and didn't seem to care, honestly."

"In the moment my instincts told me they were being unfairly treated because of the color of their skin," he added. "I wasn't upset that it was one of our players. I was upset that the only people being harassed were people of color."

This is how I saw it all last night in Houston. https://t.co/Y4imQ4q4db pic.twitter.com/3nnygw5NvZ

Parkinson appeared to be responding to the Dash's initial statement Saturday afternoon on the matter, where the club said it was aware of a Chicago player's comments, but focused more on COVID-19 safety protocols.

We are aware of comments made by a player from Chicago this morning, and we would like to assure her and the Red Stars organization that our staff was entirely focused on COVID safety, and we apologize to her and the club for anything that may have created an impression to the contrary.

In response to this situation, the team was addressed this morning at practice and we are reevaluating our policies to ensure that a situation such as the one that occurred last night does not occur again."

Two days after their initial statement, which they said "was off the mark," the Dash released a new one, acknowledging there was an incident between Gorden and a security official. The club said it would also cooperate with the investigation, including turning over any information or stadium video.

Meanwhile, the players of the Red Stars put out strong words of their own, supporting their teammate. The club said that Gorden and her boyfriend found themselves in a discriminatory encounter with the guard.

"While we acknowledge that all players need to adhere to proper post-game protocols, Sarah was treated inconsistently and inappropriately," the players wrote in part. "We will not tolerate racism or discrimination."

Gorden has been vocal about being an advocate for players within the league and, outside of it, calling for social justice, especially following George Floyd's death.

Gorden is among the athletes who kneeled and show support for Black Lives Matter.

In September 2020, she created a nonprofit, HoodSpace, focused on the mental health of young women of color.