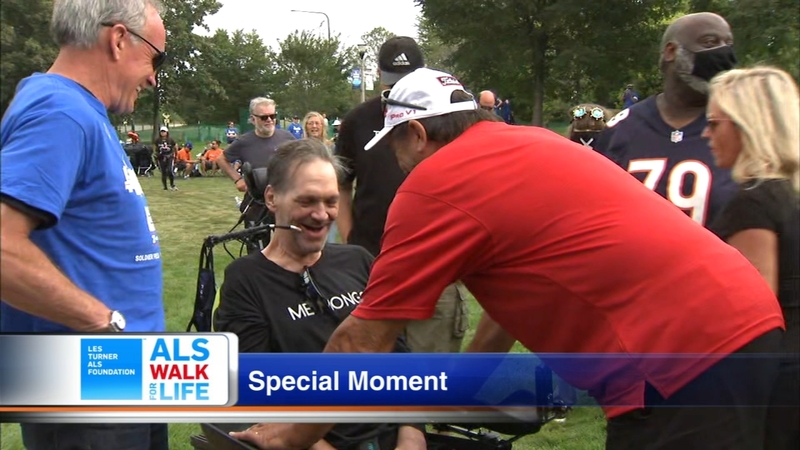 It's the 20th anniversary for the Les Turner ALS Foundation's Walk for life which was emceed by ABC 7 Meteorologist Phil Schwarz.

The Les turner foundation raises thousands every year and has already reached 80% of its $425,000 goal.

"You just never know what the next day is going to bring, you know, it's you feel good one time and three hours later you're going, Holy cow, what I just run a marathon," said Bob Olson.

Olson is a U.S. Navy veteran who was diagnosed with ALS last year.

Events like the Walk For Life help raise money for families like his because this disease is expensive to fight as the search for a cure continues.

"It's critical, because I don't think there's near enough coverage on this disease," said Olson.

Former Chicago Bear Steve McMichael attended the event with some of his former teammates to accept the ALS Courage Award.

"Let me speak about courage," McMichael Said. "It was these guys around me up here that taught me courage because going out and partying with them (pauses for laughs) I knew was going to have courage survive this. They already taught me how to deal with ALS."

"Thank you for showing your compassion, the greatest character trait in the human race, you guys keep doing what you do and one of these days will cure this."

"It saddens me to see a strong strapping young man and down to nothing and it's, it's sad, but it is reality, and hopefully with everyone that comes out today with the money that's raised will help find a cure, but until that cure is found Lisa will financially help the families," said Mongo's friend Mary Rokowski.

In the meantime, those battling the disease and the loved ones helping them through it are just enjoying the moment while they can.