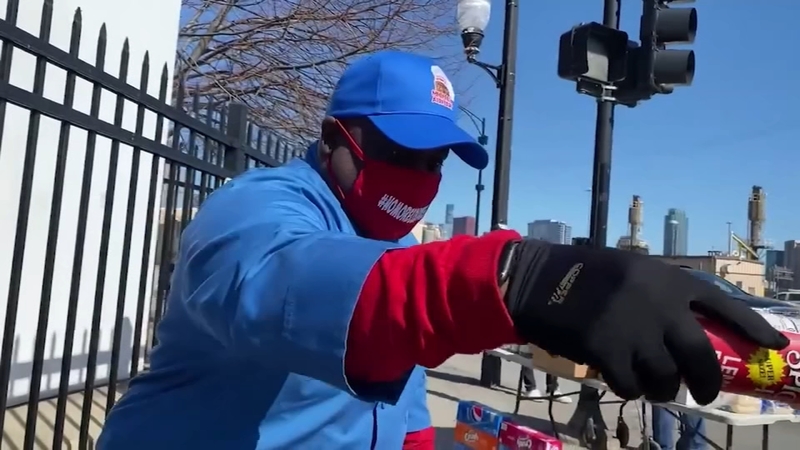 CHICAGO (WLS) -- A community leader from the South Side of Chicago has helped feed thousands of homeless people during the pandemic with his restaurant on wheels called Taste for the Homeless Cafe.

"The café is an outdoor restaurant which is 100% free, with all of the kinds of foods that you would like to eat if you had the money," said Michael Airhart, community leader and founder of Taste for the Homeless Café.

From hot dogs to steak, Airhart whips up a variety of meals to feed the homeless seven days a week. He hits 20 different locations on the South Side every day. All the food and equipment have been donated by the community and organizations.

Airhart started Taste for the Homeless about five years ago, cooking and feeding those in need from his home. It's been about two years since Airhart and his wife took that idea and put in on wheels to reach and help more people.

Airhart is no stranger to helping feed those in need; in fact, he's been doing so for about 20 years. He said his need to help those who are hungry started when he was young.

"I grew up in the projects. We were poor and we didn't have much to eat. It was always in my heart to give. It stayed with me until this day," he said.

Volunteer and long-time friend Nebraska Franklin said Airhart doesn't cook up ordinary meals for the homeless; instead he makes meals that the homeless wouldn't typically have the opportunity to eat.

"He doesn't just cook, he chefs. He makes meals for the homeless where places where they're staying at, they can't possibly imagine having a meal like that," said Franklin.

Airhart said his Taste for the Homeless Café has fed thousands throughout the pandemic. He believes acts of kindness like this can lead to major change.