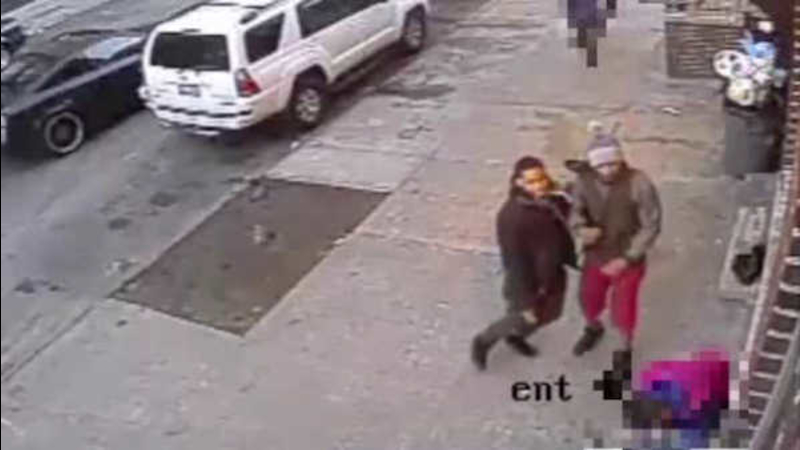 WHITESTONE, Queens -- A 16-year-old exchange student was slashed while on her way to school in Queens Wednesday morning, and authorities are hoping new surveillance video will lead to an arrest.

Police say the teen was walking to Whitestone Academy around 8:15 a.m. near 147th Street and 13th Avenue in Whitestone when she was attacked by a man wearing a surgical mask and gloves.

"It came out of nowhere," NYPD Chief of Detectives Robert Boyce said.

The suspect approached the victim from behind, and police believe he may have been following her.

She was pushed and slashed twice with a box cutter before the suspect fled, and the victim ran home and called 911.

"He is wearing a surgical mask and has surgical gloves on," Boyce said. "She is slashed in her face, twice. Once from the ear to her throat, the middle of her throat, and another part of her face as well."

The teen was taken to Long Island Jewish Hospital, where she is in stable condition after surgery.

The victim is an exchange student from China and has been in the United States for eight months.

The suspect, described as a man wearing a black hat, surgical mask, gray or light blue hooded sweatshirt and white gloves, did not say anything during the attack. He was caught on a nearby resident's security camera, which showed him chasing the girl from behind and then running away.

Police said it does not appear he is known to the victim.

Parents in the area, where many students walk to school on a daily basis, were terrified.

"I don't even have any words," neighbor Nicole Stridiron said. "It just makes my heart race. I just feel like really bad right now."

Investigators are working their way through the language barrier as community leaders do their best to help the victim and her family.

"There's no excuse for a young girl who's going to school to be attacked, and they shouldn't feel fearful," state Assemblyman Ron Kim said. "We want to make sure they feel comfortable, just working with us, and trying to catch this assailant."

The sooner the better was the sentiment from community members who are unaccustomed to active police investigations.

"I was in total shock because we live in a quiet area, never no trouble," resident Anne Nolan said. "I'm living here 34 years, never had anything like this before."