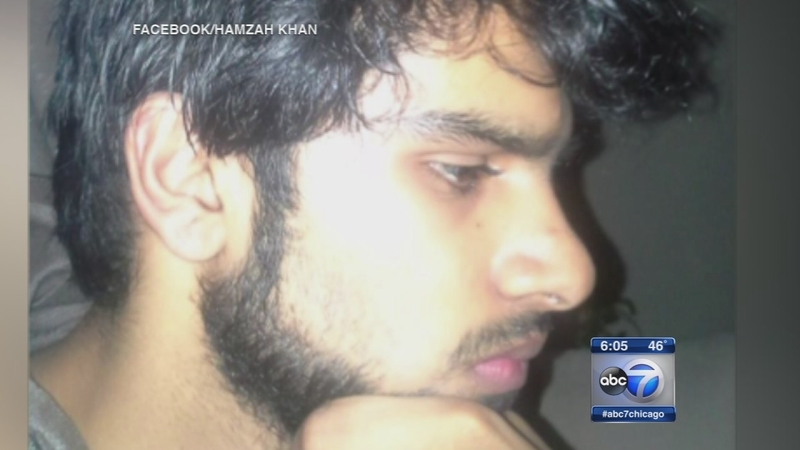 CHICAGO (WLS) -- When Mohammed Hamzah Khan was arrested at O'Hare International Airport, headed to his personal jihad, he was 19 years old.

On Thursday, at age 20, Khan stood before a federal judge in Chicago pleading guilty to attempting to provide material support to a terrorist organization. The Bolingbrook man faces up to 20 years in prison. If he continues to cooperate with law enforcement officials, however, prosecutors said they would recommend an actual prison sentence of only five years.

The agreement does call for an unusually lengthy period of court supervision once he gets out -- at least another 15 years.

As part of the plea deal, Khan must seek "psychological and violent extremism counseling" once he is released from prison. He must perform at least 120 hours of community service per year and allow authorities to search his cellphone, email and computer four times a month for the first 7 1/2 years.

"You're a young man with the rest of your life ahead of you, you don't want to spend it in a federal penitentiary," said Khan's attorney Thomas Durkin. "I don't think anyone wants to see American kids warehoused for being brainwashed by ISIS." Durkin and Khan's parents said repeatedly that ISIS was manipulating the minds of young American Muslim men and turning them into people they weren't.

The ABC7 I-Team first reported last June that a plea deal was in the works. That agreement with federal prosecutors ended up being 20-pages long and was handed up on Thursday morning to U.S. District Court Judge John J. Tharp. The plea agreement comes about one year after Khan was nabbed by federal agents at O'Hare as he tried to travel to the Middle East with two younger siblings.

When the FBI busted Khan, his 16-year-old brother and 17-year-old sister at O'Hare, the trio had travel plans to get to Syria and an agenda to join ISIS once they got there, according to federal authorities. Lawyers for Khan had argued he felt a religious obligation to emigrate to an Islamic Caliphate.

Investigators found that Khan had spent months honing his jihadist views via social media. On his YouTube account, they pointed to one of Khan's favorite videos from Syria: "We shall chop off their heads with swords... and by Allah we shall make the ground spit out their corpses," referring to the infidels who don't tote the ISIS line.

Although they didn't speak to reporters after their son entered a guilty plea on Thursday, Khan's parents had previously blamed radical Muslim leaders overseas for trying to recruit vulnerable American teens.

"The venom spewed by these groups and the violence committed by them find no support in the Quran and are completely at odds with our Islamic faith... Leave our children alone," said Zarine Khan, mother of the suspect.

The plea agreement calls for Khan to cooperate with authorities but attorney Durkin would not discuss with reporters the details or scope of that cooperation. "There's only a limited amount of cooperation he can give," Durkin said. "He didn't get there (to the Syria or to the ranks of ISIS). He only knows whoever he met online."

Also unclear is the fate of Khan's younger siblings who were with him at O'Hare but not arrested. They have not been charged and federal law enforcement officials have not discussed publicly what -- if anything -- would happen to Khan's brother and sister. Sources have said they will not be charged.