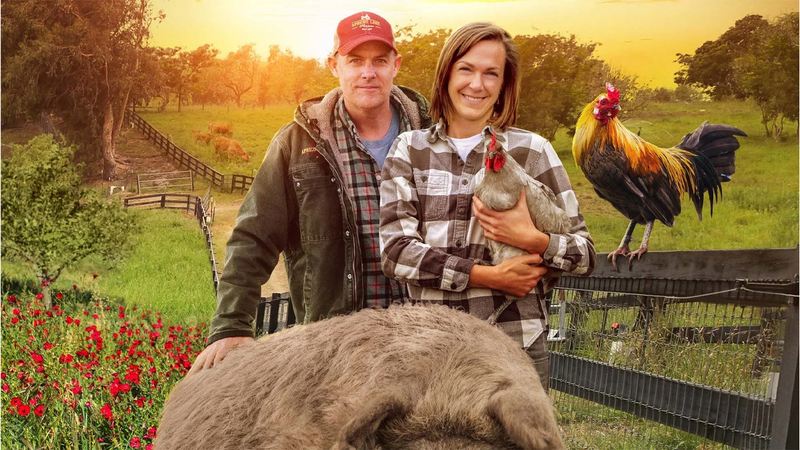 John and Molly Chester talk about 'The Biggest Little Farm: The Return'

NEW YORK -- Just in time for Earth Day, a highly acclaimed documentary is returning with a sequel on Disney+, "The Biggest Little Farm: The Return" by National Geographic.

The original film, "The Biggest Little Farm" was released in 2018 in theaters and chronicled John and Molly Chester, who abandoned their urban life to live on a barren farm to grow delicious food in harmony with nature. You can watch the first film streaming on Hulu.

They both say they don't miss city life.

"I don't want to jump too quickly to say no, but no, we don't miss city living at all," John said.

"The occasional night you'd want to go to a great restaurant, maybe, but we've got a great local farm-to-table place that we use," Molly said. "We're doing fine!"

A decade after they first moved to the countryside, Apricot Lane Farms is booming and thriving.

"It's bigger than the dreams," Molly said.

"It's amazing when you look back to think of where we've come and what's happened over the last 10 years," John said.

The farm is certified organic, biodynamic, and regenerative organic. That means that everything on the farm has a purpose and contributes to the cycle of farming.

"With this toolbox of biodiversity, the solutions become much more apparent to us and to the natural system trying to find balance," John said.

For example, problematic foxes eating their farm's chickens soon find a feast among gophers destroying their orchard and the Chesters use a flock of ducks to solve the problem of being overrun by snails. The waste created by the ducks eating the snails made the soil richer and benefited the orchard.

The farm regeneratively grows more than 200 varieties of fruits and vegetables, and raises sheep, cows, pigs, chickens, and ducks. John says that raising animals for meat must be done with reverence, respect, and responsibility.

"Not many people know the number of animals that sometimes lose their life just in order to grow avocados and other fruit, that cycle of life is an important part of the process," John said. "But, it doesn't excuse the responsibility of farmers or that we have as people living on this planet to treat all of those animals with the most human resources and natural environments as possible."

There's one part of their Moorpark, California farm they are always more excited to show off to visitors.

"Yeah, Alan York Lookout. I think it encompasses sort of the intensity of what the biodiversity translates as sitting on that hill," John said.

"It's a good spot," Molly said. "It overlooks the fruit basket that has over 75 varieties of fruit and it's just beautiful. John and I, both as kind of artists at heart, showing the aesthetic beauty along with the hard work that it takes to do it is really important for us."

You can stream "The Biggest Little Farm: The Return" only on Disney+.

ALSO READ | Earth's forest cover could drop by half by 2100; NatGeo explores how humans can protect these trees
EMBED More News Videos

This Earth Day, National Geographic focused its lens on humanity's relationship with the world's 3 trillion trees and 10 billion acres of forest.