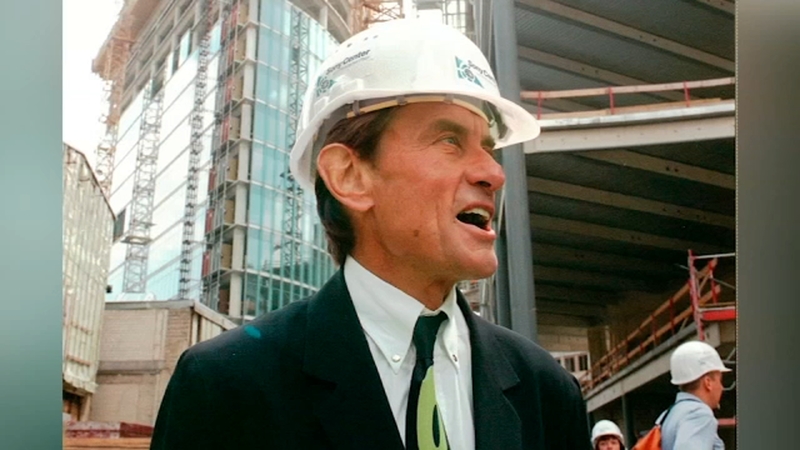 CAMPTON HILLS, Ill. (WLS) -- Helmut Jahn, a prominent German architect who designed an Illinois state government building and worked on the design of the FBI headquarters in Washington, was killed when two vehicles struck the bicycle he was riding outside Chicago.

Jahn, 81, was struck Saturday afternoon while riding north on a village street in Campton Hills, about 55 miles west of Chicago. Jahn failed to stop at a stop sign at an intersection and was struck by the two vehicles, headed in opposite directions, Campton Hills Police Chief Steven Miller said in a news release.

Jahn was pronounced dead at the scene of the accident. Authorities said the driver of one of the vehicles that struck Jahn was taken to a hospital for treatment of non-life threatening injuries.

A profile posted on the website of his firm said Jahn was born in Germany in 1940 and graduated from Technische Hochschule in Munich. He moved to Chicago in 1966 to study under legendary architect Ludwig Mies van der Rohe, a creator of modernist architecture, at the Illinois Institute of Technology.

Jahn's professional career began in 1967 when he joined CF Murphy Associates, which later became Murphy/Jahn. He worked on several major projects, including Chicago's McCormick Place and the United Airlines terminal at O'Hare International Airport, which includes a walkway famous for its colorful lighting. He also had a hand in the design of the J Edgar Hoover Building, the FBI headquarters in Washington, D.C.

He also designed the Thompson Center in downtown Chicago.

Jahn was one of the most inventive Chicago architects whose impact on the city - from the skyline to the O'Hare tunnel - will never be forgotten. His architectural footprint will be felt & seen across the globe for generations to come.

I extend heartfelt prayers to his family. https://t.co/R3e6zyfhro

Jahn's work internationally includes the Sony Center in Berlin and the Suvarnabhumi Airport in Bangkok, Thailand.

One of his more controversial buildings was the James R. Thompson Building, a glass-sheathed, Illinois government office building in Chicago's Loop that opened in 1985.

Jahn once said that The Thompson Center cemented his reputation around the world and killed it in Chicago.

"It's tragic on every level that we lost of one Chicago's most famous living architects who practiced around the world and this was his masterpiece. His early masterpiece," said Ward Miller with Preservation Chicago.

The building is often maligned for everything from cost overruns to its design -- which was meant to symbolize transparency in government.

"You go inside. There's a soaring atrium that lays bare government, if you will, and the functions of government and everything," said Lee Bey, an adjunct professor of architecture at IIT. "Here it is. Your democracy. All laid open for you."

Ironically, after years of speculation, The Thompson Center was put up for sale last week. State officials said the 17-story building is a drain on state finances because it's inefficient to operate and in need of hundreds of millions of dollars in repairs.

Conservationists, worried about its survival, are now calling on the mayor and governor to landmark the building as part of the sale package.

"This unfortunate circumstance of losing a Helmut at this time, makes the preservation of that building ever more important as part of his legacy to changing the landscape of Chicago," said Bonnie McDonald, President & CEO of Landmarks Illinois.

"He loved talking about his projects, which every architect loves to do, but I think he was at a point in his career where he could look back and be proud in his structures," Miller said.

More recently Jahn designed this still in progress 74-story residential building at 1000 S. Michigan. It's 2022 due date, indefinitely postponed as construction was halted during the pandemic.

"In losing Helmut Jahn we not only lose one of the best architects on the planet. We lose someone who cared about Chicago," Bey said. "And a voice that really spoke and cared about the city."