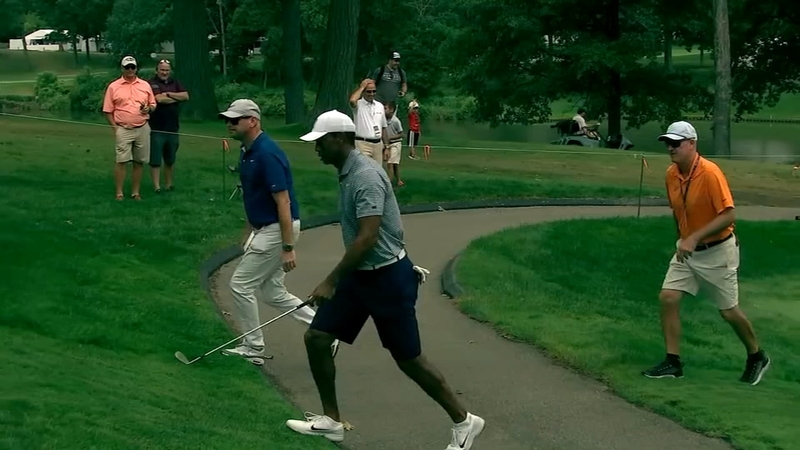 MEDINAH, Ill. (WLS) -- Tiger Woods is in the Chicago-area Wednesday for the BMW Championship at the Medinah Country Club, but he's also reportedly talking to city leaders about a proposed golf course project in Jackson Park.

Woods is scheduled to play in Wednesday's Pro-Am, but his stay in Chicago will involve more than just the upcoming tournament.

The reigning Master's champion flew in Tuesday and arrived at the Medinah Country Club. His visit has generated a lot of excitement surrounding the upcoming tournament.

It also has local leaders reinvigorated to continue talks on a stalled golf course merger. According to the Sun Times, Alderman Leslie Hairston told the paper she was hoping to get Mayor Lori Lightfoot on board the stalled Woods-designed plan to merge both the Jackson Park and South Shore golf courses.

The South Shore Jackson Project will include an 18-hole course designed by Woods along parts of Lake Michigan. The multi-million dollar merger has divided city leaders because it would require closing Marquette Drive, in addition to relocating the South Shore Sanctuary to make way for a new 12th hole.

Woods and his TGR design team are the lead architects on a proposal to merge the South Shore and Jackson golf courses into a new public golf course. Back in 2018, Woods said he opened this project would open up multiple opportunities, including jobs to Chicago's South Side.

"To build a public golf course in Chicago, that's as good as it gets," Woods said. "They really do support their golf there. It's one of the great sporting towns ever, but as a golf town it's probably the best."

Mayor Lori Lightfoot has said in the past she was not "wild" about the merger. Now, those who support the project hope his visit will add a spark to the delayed project.

When asked about if the mayor planned to meet with Woods on this visit, she told the Sun Times she would try, but that this visit wouldn't be their opportunity to talk.
Report a correction or typo
Related topics:
sportsmedinahchicagojackson parkpgagolftiger woods
Copyright © 2022 WLS-TV. All Rights Reserved.
TOP STORIES
Security guard shoots man in buttocks at Millennium Park
Chicago mass shooting victim ID'd as father of 2, with twins on way
9 shot, 2 fatally, on Near North Side
Postal police say they are sidelined during time of heightened crime
New hotline aims to help those struggling with opioid, substance abuse
Officer relieved of powers after teen carjacking suspect shot: CPD
Chicago Weather: Occasional showers, thunder Saturday
Show More
United cancels couple's flight, charges $4K more for same seats
Teen charged with killing man after kicking him in head in CTA attack
Great Lakes Piping Plover chick Imani spotted in Minnesota
Doja Cat drops out of Lollapalooza due to throat trouble
Legendary Cubs pitcher 'Fergie' Jenkins immortalized with statue
More TOP STORIES News